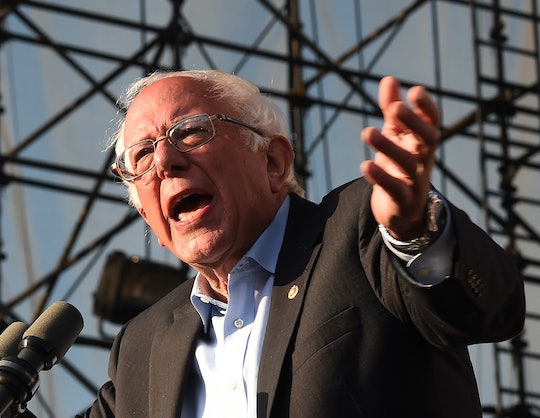 Will Bernie Sanders Run As A Third-Party Candidate? Not If It Gives Trump Any Advantage

With just seven primaries left before the Democratic National Convention in Philadelphia, Pennsylvania this July, the primary delegate math has come down to the wire for Vermont Sen. Bernie Sanders. He currently trails his Democratic opponent, former Secretary of State Hillary Clinton, by 271 pledged delegates — a gap which many political analysts agree is a statistical improbability for Sanders to overcome in these last four weeks before the convention. This has left some wondering: Will Bernie Sanders run as a third-party candidate?

Sanders has said again and again on the campaign trail that he plans to take his campaign all the way to the convention if he doesn't get enough delegates during the primaries. Still, the 74-year-old senator believes he can still secure the almost 95 percent of delegates left to lock in the Democratic nomination before the convention — despite the unlikelihood such a comeback for Sanders. There's been some debate as to whether Sanders will simply bow out from the Democratic race and campaign as a third-party candidate. Until the official word comes down from Sanders himself or his campaign, there's no certain answer about whether or not Sanders will seek a third-party run for president.

For Sanders, running third-party is nothing new. Tim Farley, a contributor for the The Hill, noted in an April piece that Sanders "has no demonstrated loyalty to the Democrats" — and it's an astute and accurate observation. Sanders only declared himself a Democrat last year and that was just to get him on the Democratic primary ticket. Prior to that, Sanders ran and legislated as an Independent in Vermont for 36 years.

Secondly, Sanders has also made it clear that there is no love left for Democratic National Committee Chairwoman Debbie Wasserman Schultz. On Sunday, Sanders endorsed Wasserman Schultz's opponent, Tim Canova, for her congressional seat in Florida's 23rd district. He told CNN's Jake Tapper that if he were elected president, he would not reappoint Wasserman Schultz as chair of the DNC.

Thirdly, many of Sanders supporters believe that the Democratic race was always stacked against him in the first place, a sentiment that came to a particular ugly head as violence erupted from Sanders' supporters during Nevada's Democratic state convention on May 16. If Sanders went third-party, he'd would take a substantial number of his supporters with him.

As he's repeated on the campaign trail, particularly after such primary losses with big delegate grabs like Pennsylvania and New York — Sanders intends to take his presidential run all the way to the convention. Even if he doesn't secure the nomination — and, let's be realistic, he probably won't — he can still achieve victories for the Democratic party at the convention in July. Not only has Sanders pushed Clinton more towards the left on a number of issues, but it was announced on Monday that Sanders will have more influence on writing the Democratic party platform at the convention.

If Sanders runs as an Independent, it's the 2000 Gore-Nader fiasco all over again, when political activist Ralph Nader's Independent run for president basically paved the way for then-Vice President Al Gore's loss to then-Texas governor George W. Bush.

An Independent run by Sanders would absolutely siphon votes away from Clinton in November — and that's exactly why billionaire and GOP nominee Donald Trump has urged Sanders to run third-party, because it would give him a serious advantage against Clinton. Given recent polls showing that Clinton has now fallen behind Trump in a head-to-head match, grabbing votes away from Clinton doesn't seem like such a prudent idea.

I'd like to think that there's a reason Sanders has been in office for 36 years — it hasn't all been blind luck because Sanders is a smart man. Here's hoping that Sanders makes the smartest decision of them all this campaign season: Not to do anything — such as a third-party run — that could give talking hair piece Donald Trump an actual chance of winning the White House.