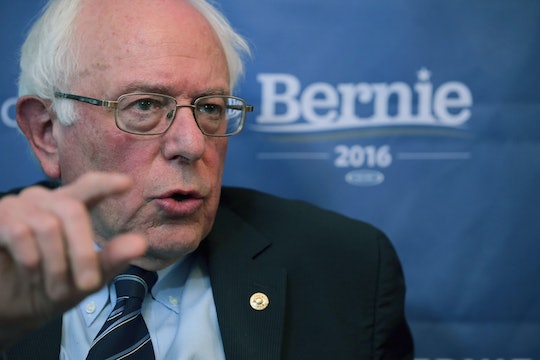 Will Bernie Sanders Still Be At The Democratic Debate On ABC Dec. 19?

On Friday, democratic primary Bernie Sanders’ campaign was barred from accessing very necessary voter information by the Democratic National Committee, but Bernie Sanders will still be able to debate tomorrow night in New Hampshire. But that doesn’t mean this isn’t all a very big deal. Today, Sanders sued the DNC for barring his campaign from using the voter database. Sanders has been rallying supporters all day to sign a petition to protest the suspension and call the DNC for what he believes is unfair treatment.

It is a huge blow to his campaign, and many feel that the move proves the DNC has stacked the deck for Hillary Clinton. Sanders has lots of grassroots support and will be able to debate Clinton tomorrow night, but it’s probably going to get a little heated. In an earlier debate this year, Sanders tried to redirect questions about Clinton’s emails, but he might need to start getting a little tougher when it comes to playing politics. Losing access to the database is a huge setback for the campaign, so he’ll have to come out swinging tomorrow if he wants to garner support before the Iowa caucus. Bernie just doesn’t think it’s fair. On Friday, his campaign manager said that:

The DNC, in an inappropriate overreaction, has denied us access to our own data.In other words, the leadership of the Democratic National Committee is actively trying to undermine our campaign.

It doesn't look like Sanders is anywhere near giving up, either.

Voters can't wait to see how he responds tomorrow night and sort of see where he's coming from on the DNC:

It does seem to me a little House of Cards-to have a debate the Saturday before the holidays and take away a necessary database, but I'm only speculating. Let's hope everyone is playing ethically and by the rules.