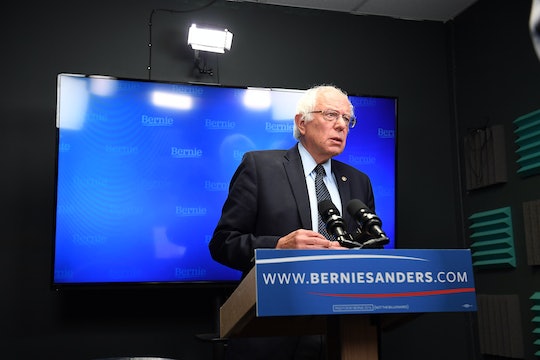 Now that former Secretary of State Hillary Clinton has become the presumptive Democratic presidential nominee, supporters of Vermont Sen. Bernie Sanders are left in a bit of an awkward position. Do they shift their support behind Clinton in an effort to keep a Democrat in the White House? Or do they vote for Republican nominee Donald Trump after spending months considering all the ways they felt Clinton wasn't living up to Sanders' example? It's a complicated (and speculative) question, but one that both Clinton's and Trump's camps are eager to figure out. Will Bernie Sanders supporters actually vote for Donald Trump? The answer could have huge implications.

On the surface, the idea that Sanders supporters could actually cast ballots in favor of Trump in November seems preposterous. After all, according to The Guardian, Sanders himself has said very explicitly that he considers the goal now to be ensuring that Trump doesn't win:

The major political task that we face in the next five months is to make certain that Donald Trump is defeated and defeated badly. And I personally intend to begin my role in that process in a very short period of time.

But one thing that might stand in the way of that happening? Some Sanders supporters really, really don't like Clinton.

The problem, according to The Independent, is that, although many Democrats identify closely with Sanders' democratic socialist message and still want to push for things like an increased minimum wage and universal healthcare, Clinton, in comparison, still looks an awful lot like "the establishment" that Sanders was running so fervently against. Now that his supporters are left to choose between Trump and Clinton, for some, it's an awfully close call.

Throughout the campaign, according to The Washington Post, white men without college degrees have consistently been shown to be the demographic who dislike Clinton the most, and it's no surprise that it's also the demographic Trump hopes to appeal to. And judging by the newspaper's recent polls, white male Democrats are more likely than any other non-Republican group to consider Trump fit to lead the United States.

What is also concerning for Democrats? According to The Guardian, if Sanders were continue to run for President as an Independent, he would sway away enough Democrats that Trump would actually win.

As far as Sanders is concerned though, having Trump in the White House would be disastrous — even if, as Trump has claimed, he plans on incorporating some of Sanders' ideologies into his own campaign. According to New York Magazine, in a speech delivered in New York City Wednesday morning, Trump explicitly invited Sanders' supporters to back him:

The insiders wrote the rules of the game to keep themselves in power and in the money. That’s why we’re asking Bernie Sanders’s voters to join our movement, so together we can fix the system for all Americans.

It's a wise move on Trump's part of course, but will it be enough? Not if Sanders can help it. According to The Guardian, in a recent speech, Sanders spoke about working with the Clinton camp to unite the party, and to use his influence to ensure that the concerns of his supporters are still going to be heard:

I look forward, in the coming weeks, to continued discussions between the two campaigns to make certain that your voices are heard and that the Democratic party passes the most progressive platform in its history and that Democrats actually fight for that agenda.

The same day, Sanders' campaign manager, Jeff Weaver told Bloomberg Politics that the Democratic party will be united following the convention in July, where Clinton is expected to be officially named as the party's candidate.

One thing definitely seems clear, however: Trump is likely just getting started in his efforts to woo Sanders supporters over to his camp. And both Sanders and Clinton are going to have to work pretty hard if they want to ensure that doesn't actually happen.