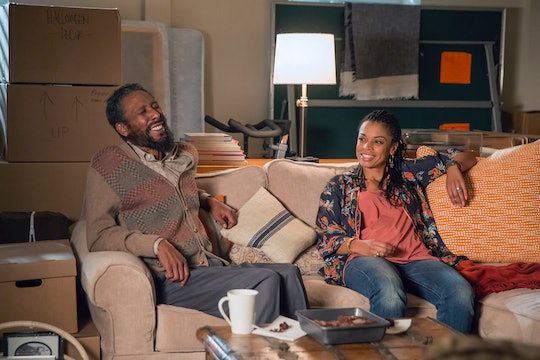 Will Beth Tell Randall William's Secret On 'This Is Us'? It's Bound To Come Out Eventually

Every family has secrets, but that doesn't make learning about them any easier. That's exactly that kind of thing Randall's wife, Beth, learned firsthand during Tuesday night's episode of This Is Us. Knowing that William is suffering from his latest chemo treatment, she offered to make them some "special" (aka pot) brownies once she put the kids to bed for the night since Randall was out spending time with Kevin. So as you would expect inhibitions were dropped, guards were down, and William ending up revealing a big secret he's been harboring for years: the fact that he and Rebecca knew who each other were, even though Rebecca claimed to know nothing about him. So will Beth tell Randall William's secret on This Is Us? In my opinion, it's only a matter of time before the truth comes out.

Now, of course, this is something the viewers have known for quite some time now, given that the series shows us flashbacks of when Rebecca tracked William down to ask him questions. The two made an agreement to not tell anyone they had met and keep Randall from him. The intentions were good on both sides, but that's not going to stop Randall from feeling very betrayed. He loves and trusts his mother, so to find out she's been keeping this from him for his entire life will not go over well and could end up severing their close bond that they've developed throughout the years.

Part of me can't blame her, mainly because I don't know what I would do if presented with a similar situation. But lying to him well into his adulthood is hard to defend after a certain point. He clearly wanted to know more about where he came from, so to hide that from him wasn't really her call to make.

For William's part, he felt awful that he let the secret slip in front of Beth. He didn't do it on purpose or to create problems with Randall's adoptive family. It truly was a genuine mistake. But while Beth has yet to confront Randall about all of this, she did make a call to Rebecca in order to discuss what she knows. And judging by the promo for next week, Thanksgiving is going to be when everything get laid out into the open. Let's just hope Rebecca and Randall's relationship is able to survive whatever drama and truth come to the surface.