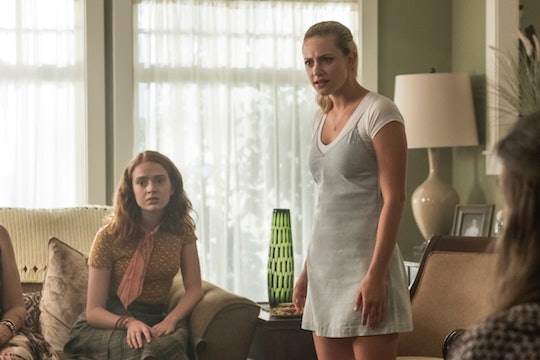 A Creepy Group Is Trying To Recruit Betty On 'Riverdale'

After the Season 3 premiere of Riverdale, it is clear that the town has yet another sinister presence to deal with. Fans finally got to see the “farm” Polly had been talking about since Season 2, and it turned out to be more of a cult than the retreat she described. Polly and Alice joined the group, and they’re actively trying to recruit Betty. So, will Betty join the farm cult on Riverdale?

As of now, there’s no way to tell if Betty will join the cult or not, and fans will have to continue watching Riverdale to find out. However, Betty’s distrust of the group and its leader, Edgar Evernever, shows that she isn’t going to fall into their fold so easily. When Alice tries to feed Betty Edgar’s cultist lingo in the Season 3 premiere, Betty calls him a “guru of a Heaven’s Gate commune,” referencing the real-life suicidal doomsday cult from California. While it may be a harsh comparison, fans are hoping that Betty’s skepticism keeps her safe.

But that doesn't mean all is well for Betty at the moment. The premiere episode reveals that she was lying about seeing a therapist and was self-medicating with an illegal Adderall prescription all summer. When Polly confronts Betty about her drug use, she mentions how the farm and Edgar have helped her heal without any pharmaceuticals. “You call me and my friends crazy, but you’re the one with the secret life, hoarding stolen drugs, hiding from your pain,” Polly tells her. “You may hate the farm, but they healed me, and they healed Mom, and they can heal you. But first you need to admit that you’re sick.”

After getting the disheartening news that Archie is going to spend the next two years in jail, Betty comes home to find the cult performing some kind of fire-pit ceremony in her backyard. She sees Alice and Polly raising Polly’s twin babies, Juniper and Dagwood, over the fire, and then sees them levitating in the air. In the last moments of the episode, Betty falls on to the balcony in what looks to be a seizure, and her mom runs over to help her.

So, did Betty really see the babies floating in air, or was it just a hallucination? The most obvious answer is that Betty was experiencing negative effects of her medication. The seizure and hallucinations may have been a result of its abuse, her withdrawal symptoms from it if she quit (which she talked about with Jughead), or from someone tampering with her meds (which is completely plausible on Riverdale). Whatever the reason behind her collapse, it could make Betty emotionally vulnerable, giving Alice and Polly more reason to push the cult’s “healing” powers onto her.

It’s clear that the cult will be a big part of Season 3, and Riverdale executive producer Roberto Aguirre-Sacasa told TV Guide that it will become the season’s biggest mystery. While he didn’t reveal an exact explanation of the magical floating baby scene, he did hint that things are just going to get wilder this season. “Either Betty is having a hallucination, or some very, very, very scary cult members have come to Riverdale, or — both,” said Aguirre-Sacasa. “We wanted something that was really shocking and disturbing and disorienting. The reason I can't tell you conclusively what it is, is because that's the big mystery. I can tell you that it only kind of gets freakier from that moment on.”

Whether or not Betty gives into the cult’s pull is yet to be seen, but hopefully, she will be able to maintain her better judgement. No path is ever certain on Riverdale, and it will be exciting to see all the surprises this season brings.