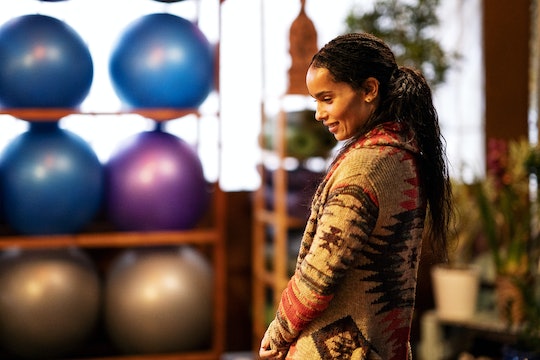 Bonnie's Demise Might Be The Natural Endpoint For 'Big Little Lies'

There's only one episode of Season 2 left, and the big question dangling over the Monterey Five is whether Bonnie will die on Big Little Lies. Admittedly, it would be a pretty tidy ending; she killed Perry at the end of Season 1, then she herself dies at the end of Season 2, giving the series a sense of closure. The other women have gone to excruciating lengths to stick together and cover up the circumstances of Perry's murder, so Bonnie's death would come as a huge, albeit tragic, relief. And, given the rumors that HBO likely won't be renewing the show for a third season, Bonnie's death would tie up any loose ends and offer a satisfying conclusion.

HBO president Casey Bloys admitted it would be nearly impossible to continue the series, based on the highly in-demand Hollywood actresses it employs. As it is, Big Little Lies was only supposed to be a seven-episode miniseries before it blew up into a cultural phenomenon. It was so well-received that executive producers Nicole Kidman and Reese Witherspoon commissioned a sequel novella from author Liane Moriarty so they could extend the HBO adaptation into a second season.

Bloys said in an interview with TVLine:

I love this group of people — I would do anything with them. But the reality is, they are some of the busiest actresses working in Hollywood. We have deals with some of them — Nicole [Kidman] is doing her next show with us. I just think it’s not realistic.

So it would appear that the buck stops with Season 2, and Bonnie's death might be a natural endpoint. But how would it happen?

For starters, Bonnie's mystic mom has a vision of her daughter floating in the ocean in Episode 4, which many fans are interpreting as a piece of foreshadowing. It's clear that Bonnie has been struggling more than the others with Perry's death — after all, she's the one who actually killed him. Plus, now that viewers have been given more insight into her backstory, it's obvious that her actions weren't exactly a snap decision made in a moment of self-defense.

Bonnie has carried around a lot of rage for a very long time; she's long-suffered violent urges which she seems to have just barely been keeping at bay. It would make sense, then, that Bonnie feels an added layer of guilt over Perry's death. Killing him wasn't quite pre-meditated, but inflicting injury on someone who was hurting someone else seems to be something she's been fantasizing about for a long time. The circumstances of Perry's death may have just been a convenient excuse to exorcise her trauma.

Bonnie has been withdrawn and clearly struggling for the entire season, so some viewers may think she will take her own life by the end of the season. However, that's not the only possibility. Maybe she dies by a tragic accident. Maybe she's targeted somehow by Mary Louise (who doesn't seem like a person you'd want to mess with). Maybe her mom isn't having visions at all and Bonnie will end the season in perfect mental health. It's anyone's guess.