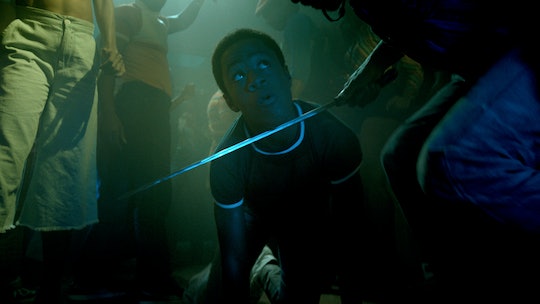 Boo-Boo Is In Serious Trouble On 'The Get Down'

Part II of Netflix's The Get Down Season 1 ended with most of its main characters in flux. Zeke was preparing to embark on a future far from from everything he grew up with, uncertain whether the people he loved would still be a part of his life. Mylene was on her way to becoming a major star, leaving Zeke behind even though she asked him to wait for her. Shaolin, left alone, returned to the life he'd tried so hard to escape. Dizzee might have been hit by a train while running from the cops, and Boo-Boo was arrested for his involvement with Shaolin's drug dealing. But will Boo-Boo get out of jail on The Get Down?

Everything fell apart just as it finally seemed like it was coming together in "Only From Exile Can We Come Home." After joining forces with all of the other DJs and their crews in the Bronx in an effort to overcome Fat Annie, it looked like the Get Down Brothers were going to be triumphant. However, her reach stretched farther than theirs did and there was no way she was going to let Shaolin go. She exercised her control by getting the detective on her payroll, Inspector Moran, to arrest Boo-Boo; it was a move designed specifically to hurt Shao, and it ultimately splintered the entire group. Boo-Boo may get out of jail at some point, but the damage was already done.

Boo-Boo's arrest was what finally caused Zeke and Shao's friendship to fracture irreparably. Boo was only 15 years old, which was part of the reason Zeke was so horrified that Shaolin allowed him to sell drugs. Boo-Boo may have sought the gig out himself, but Shaolin's position within the group (both as their DJ and as one of the oldest) meant that he had to look out for his friends; he was supposed to protect Boo-Boo, the youngest.

Without knowing whether or not The Get Down will be renewed, it's impossible to say when Boo-Boo will be released from jail — if he is. No one involved in the show seems to have commented on Boo-Boo's fate specifically, and his charge was a serious one. Boo-Boo was arrested for distributing felony quantities of PCP, which could get him anywhere from five years to life depending on the exact amount — and it seemed like Boo-Boo was selling a lot.

The rising hysteria about drugs throughout the late '70s and '80s led to an increase in incarceration, which is an important part of the history the show is exploring, even if what happened to Boo-Boo was painful and heartbreaking. The fact that he was a young, first time offender could work in Boo-Boo's favor, but he might still end up behind bars for some time.