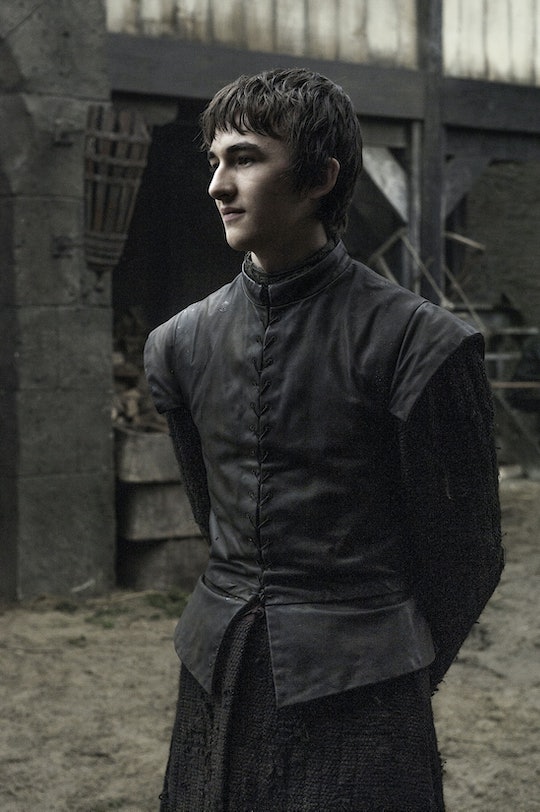 Will Bran Tell Jon About R+L=J On 'Game Of Thrones'? That's The Only Thing Left To Do

On Sunday's Game of Thrones, we finally witnessed Bran's first flashback of Winterfell, featuring younger versions of Ned, his Uncle Benjen, and even Lyanna. So with the introduction of his long dead aunt, who he never met but we had heard enough about, you might be wondering if he will find out about the Tower of Joy, and (if he does and it confirms the popular theory), will Bran tell Jon about R+L=J? By now, we're all pretty familiar with the super popular theory that leads us to believe that Lyanna Stark is actually Jon Snow's mother, making him her love child with Raegar Targaryen. Or, an actual legitimate child, if they married secretly, which is another branch of the R+L=J theory.

But given that Season 6 Episode 2 opened up with such a treat of a flashback in the form of a vision, it was probably just the taste of what he can see and a little appetizer, so to speak, and we won't get to see what we've been waiting for (for forever) until a couple of more episodes have gone by. As it is, we've still got to see some sort of scene involving Jon staggering out of his room, a beautiful naked mess, and slowly regaining his composure into the man we lost last season. At least, I hope there are no permanent damages done by Melisandre's magic.

It's not totally out there, though, to suggest that Bran will tell Jon about R+L=J sooner rather than later, since they aren't that far from each other, geographically. Bran, Hodor, and Meera are still in those caves beyond the wall, while presently, Jon is still holed up in Castle Black, which is right at the wall. The question is, once Bran finally sees in his visions the proof of R+L=J, will he get to Jon in time or will Jon have already left for Winterfell in order to kill Ramsay and take back his home? If that's the case, it won't be hard for Bran to get to him still, but if ever there was a time for Stark kids to reunite, it is now. For the good of the North, right? (If only iPhones existed.)

When the Night's Watch (well, Thorne's men, anyway) banded together and killed Jon Snow, all hope of R+L=J kind of flew out the windows of Castle Black. There would be no point in confirming the theory if the person in question was dead and gone. But much like Doc Martens and big blowout hair, Jon Snow couldn't stay gone for long, reigniting our hope that not only will R+L=J be proved true, but that it will be revealed this season. And really, not only that, but that it will also be revealed to Jon himself, the most important person to hear about his true lineage. Will this make him want the Iron Throne for himself? He'll have a real claim to it, in a way, even if he is another bastard, this time of Raegar and Lyanna.

Clearly Season 6 of Game of Thrones is coming up Stark. And now, more than ever, we're getting scenes that are heavy on each of the Stark kids left (okay, except for poor forgotten little Rickon, about which, yeah I don't even know what to say), hopefully paving the way for big things to happen for them all, this time in good ways. It's not clear yet if they'll all have a big ole Winterfell reunion during season 6 of Game of Thrones, but if Sansa can find Jon and Bran can tell Jon about R+L=J, it's a serious start. The North remembers.