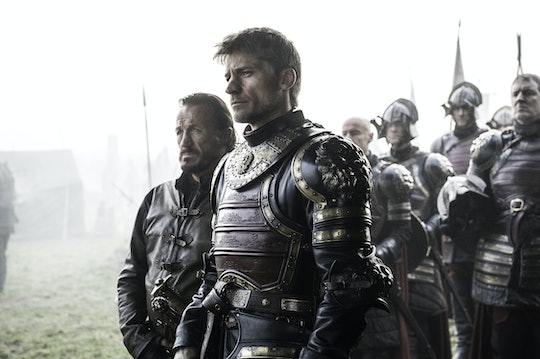 Will Brienne & Jaime Fight On 'Game Of Thrones'? Their Face-Off Might Be Unavoidable

Resurrections, reappearances, and reunions. These seem to be the running themes of the sixth season of Game of Thrones. So far it's mainly been the Starks that have been reunited, but based on the preview for the eighth episode of this season, it's clear Brienne of Tarth and Jaime Lannister will once again be together. But as fate and luck would have it, this won't be a friendly reunion, as they're fighting on opposing sides at Riverrun.

The last time Brienne and Jaime were together was back in Season 4 when Jaime sent Brienne to go find Sansa and protect her from his sister, Cersei. Now that Brienne has found Sansa and has sworn fealty to her, Brienne is oath bound to help Sansa in anyway that she is asked to. Unfortunately for Jaime, that means Brienne is heading toward Riverrun to locate Sansa's great-uncle, Brynden Tully, and recruit him to help them take back Winterfell. Meanwhile, Jaime is currently at Riverrun trying to take it back from Brynden.

Brienne is known for her endless loyalty, and there is no doubt her loyalty to Sansa extends to Brynden, which means a Brienne/Jaime face-off is on the horizon.

"Should I fail to persuade the Blackfish to surrender and should you attack the castle, honor compels me to fight you," Brienne tells Jaime in the trailer.

"I love Cersei and if I have to slaughter every Tully that ever lived to get back to her, that's what I'll do," Jaime says.

And thus these friends (kind of?) are now enemies because, let's be real, there's no way Brynden is going to back down and Jaime isn't leaving without a fight. Although this is heartbreaking for all those who ship Brienne with Jaime (though seriously, obviously Tormund is her true love) a Brienne/Jaime face-off is exciting. These two travelled together, fought off enemies together, and no one can deny there was definitely some sexual tension there. Now they have to fight each other? This is a like a twisted Romeo and Juliet story, except one of them will probably actually survive while the other certainly will not, and truth be told, Jaime will probably be the loser of this fight.

But will the Riverrun battle really end in a fight between Brienne and Jaime? It's very likely. These two would be the clear leaders of each side, unless Brynden decided to lead the charge instead. Plus, Brienne is nothing if not loyal and she will do whatever she can to obey Sansa's wishes, even if that means killing the guy she might've been in love with. Sorry, Jaime!