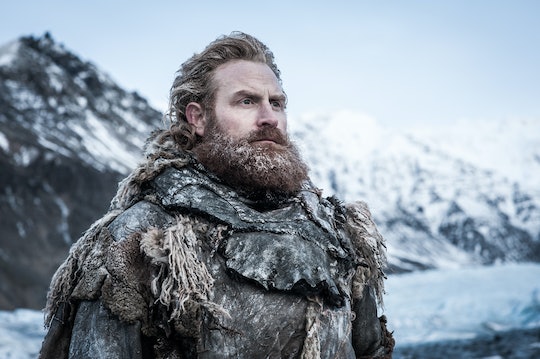 From the very first moment Tormund laid eyes on Brienne, he was infatuated. She was tall, blonde, and had blue eyes, and he couldn't look away. Brienne, however, didn't really appreciate Tormond's staring. Even so, that hasn't stopped Tormund from looking and trying his best to win Brienne's affections. He has continued to admired her, especially when she's fighting, and she continues to pretend she doesn't notice. However, it's clear that she does.

This far in the series, Brienne was only interested in Jaime for a brief time before he inevitably returned to Cersei. Since then, Brienne hasn't shown interest in any one, but she's also been pretty busy. It's possible that she's at least mildly interested in Tormund, but because of her insecurities she's resisting his advance, or doesn't even believe Tormund is really interested in her.

Or, maybe Brienne just isn't into that into him. But that's a little hard to believe. Brienne can take care of herself and if Tormund truly made her uncomfortable wouldn't she have just put him in his place by now? Why let him go on thinking he even has a chance if she wasn't at least a little bit interested? That seems to imply she's at least thought about giving Tormund a chance, so perhaps if he keeps trying he may very well get his shot with her. That seems to be his current plan, at least based on what he told the Hound during their adventure beyond the wall.

During the trip, Tormund and the Hound seemed to begin a tense bromance in which Tormund explained that even though he isn't with Brienne yet he plans to be one day. He hopes they will one day wed and she will forever be his. It seems, despite not being given any sign that Brienne is interested he feels certain they're meant to be together. Only time will tell if he's actually right. For now, they both have to survive the upcoming war against the army of the dead before they can even seriously consider given their relationship a shot.