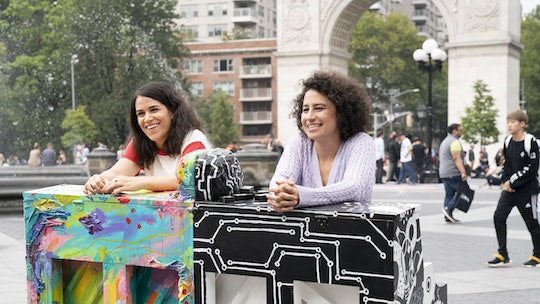 You Have A Few Different Options For Streaming 'Broad City'

The fifth and final season of Broad City starts on Comedy Central on Jan. 24, but if you're not a cable watcher than you might need to find a different way to watch. If streaming is more your speed and you're looking forward to marathoning the show after it's over, then you might be wondering if Broad City will be on Netflix. Unfortunately, there isn't any indication that the show will be on Netflix any time soon. But that doesn't mean you can't stream it.

Netflix subscribers might be out of luck when it comes to Broad City, but if you have Hulu, then you're good to go. The first four seasons are currently available there, so it would stand to reason that Season 5 will be joining them shortly. There hasn't been official confirmation one way or another, but if things work the same way they did in previous seasons, it seems like Hulu will be Broad City's next home.

Still, there are other options, even though Netflix isn't one of them. You can purchase any season of the show on Amazon Prime; you can also catch select episodes on the Comedy Central website. Almost the entire third and fourth seasons are available there. And who knows what the future might hold? There's always a chance Broad City could migrate to Netflix one day. You never know!

But if Broad City does move onto another streaming platform, then it will likely be after the show ends. Season 5 will have ten episodes in total, so the show should conclude by late March, barring any breaks or brief hiatuses. New episodes might be up on Hulu or the Comedy Central site a few days after they air. But if it's going to be on another streaming service (and, to be clear, there hasn't been any announcement yet that it will be) then it would probably be some time after March.

Series creators and stars Abbi Jacobson and Ilana Glazer made the decision to end Broad City after five seasons because they felt it was the right time to move on. They sat down for a joint interview with Entertainment Weekly to talk about the show ending, explaining that the vibe was definitely bittersweet — though there would be some classic Broad City zaniness throughout the final season, too.

They'll miss the show as much as the viewers will, even though they felt they needed to grow in other ways now. "We love the show obviously, as creators of it but also as audience members," Jacobson said. "We care about these characters so much. They've meant so much to us."

But even though it'll be tough to see the show go, viewers have numerous ways to enjoy it until the end. It's certainly easy to hop over to Netflix and press play on a series (or scroll endlessly until you fall asleep without ever watching anything; your choice), but fans of Broad City will have to look elsewhere. Hulu or Comedy Central are your best bets when it comes to catching up on the show when it says goodbye at the end of Season 5.