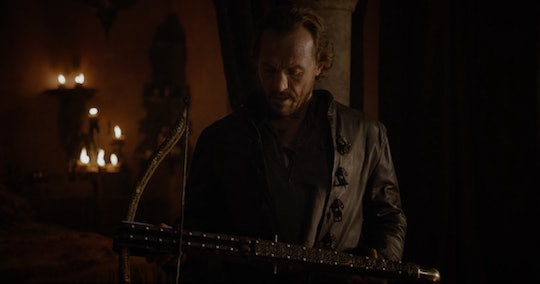 Bronn Is Tasked With An Unimaginable Assassination On 'Game Of Thrones'

Fans knew nothing good was coming Jaime Lannister's way after he openly defied Queen Cersei and chose to ride North to fight the Army of the Dead after she commanded him to stay put in King's Landing. But the Season 8 premiere revealed her brutal plan. In the first episode of the season, Maester Qyburn asks Bronn to kill Jaime and Tyrion, Cersei's similarly treasonous brother. Bronn is a sellsword, a highly skilled mercenary for hire, so Cersei sends along a few chests of gold to make a payment upfront. Qyburn assures him there's more where that came from, and a highborn wife in it for him if he assassinates the queen's brothers — specifically, using the crossbow Tyrion used to kill their father, Tywin.

It seems relatively straightforward, but Ser Bronn of the Blackwater — the noble title he was given after his impressive showing at the Battle of the Blackwater — seems reluctant about the proposition. To Qyburn, he frames his skepticism as being about whether Cersei will make good on her promise. After all, he's worked in service to the Lannisters before, and had his land and betrothal revoked. But Qyburn assures him Cersei is capable of following through this time.

Of course, viewers know that Bronn has deep ties to both Jaime and Tyrion, and although he pretends not to have any attachments, it's pretty clear that he shares a bond with the Lannister brothers. He served as Tyrion's champion in a trial by combat at the Eyrie, and went on to become his personal bodyguard in exchange for considerable power and fortune. When Tyrion became Hand of the King, Bronn's star rose, too; he was appointed Commander of the City Watch. The pair grew close over this period and had a pretty heartwarming bromance going on. It's hard to imagine Bronn, cynical as he is, taking out the man responsible for his rise to prominence.

And his relationship with Jaime runs equally deep. Bronn is the one who taught Jaime to swordfight again after his hand was cut off, a frustrating but rewarding challenge for both of them. Bronn also spends the better part of a season traveling to Dorne with Jaime to rescue Myrcella Baratheon. The two go on to take over Riverrun together, capture Highgarden, and barely survive Daenerys' dragon attack on the Lannister convoy. In fact, Bronn saves Jaime's life during that last one, when he knocks the Kingslayer out of the dragon's fire-breathing path.

Ultimately, Bronn has saved both Jaime and Tyrion countless times and he's spent most of his time on the show standing by one of their sides. Sure, he technically goes where the money is, and Cersei is throwing a considerable amount of it at him to take out her brothers. But Bronn's attachments to Jaime and Tyrion seem much stronger than his will to serve Cersei. He may be gruff, but Bronn is one of the show's characters with a heart of gold. Viewers are clearly meant to believe he's an honorable guy deep down and I have a hard time believing he'd actually assassinate Jaime and Tyrion. Of course, that puts him in Cersei's crosshairs, but he's proven himself an adept survivor.