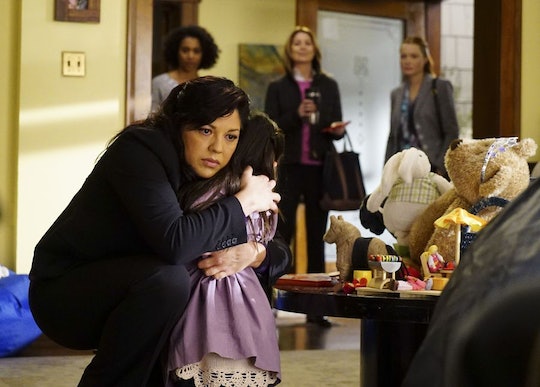 Sara Ramirez sent a tweet after she wrapped shooting on Season 12 which triggered mass hysteria among the Grey's Anatomy fanbase. While it could be read innocently enough, the fact that Ramirez's Grey's contract is up in June and the fact that she has yet to re-sign extending her deal, has fans wondering: will Callie Leave Grey Sloan Memorial Hospital? "That's a wrap for Doctor #CallieTorres," she wrote in the tweet, adding, "#Season13 #GreysAnatomy #ThankYou all for an enriching & unforgettable #Rollercoaster ride!"

It definitely sounds like a sweeping graduation day sentiment, but also, maybe Season 12 was just a really big year for her and she was simply feeling grateful that summer break was finally here? Also, peep that all-important #Season13 hashtag. That's a very clear indicator of an "on to the next" or a "here's to next season" kind of sentiment. As several outlets have pointed out, the tweet could simply be a smart negotiating tactic on behalf of Ramirez: if she whips up a fan frenzy speculating over her potential departure, studio execs will see how valuable she is to the series and fight harder (not to mention, offer more money) to keep her. If that's the case, then lean on in like a boss, Sara. We will dutifully cause the requisite ruckus.

Another huge clue that this tweet doesn't spell the end for Dr. Torres is the fact that Sara Ramirez sent an extremely similar one last year, at the close of Season 11, even using some of the same, sweepingly final language:

It's entirely possible, though, that Ramirez and the show won't be able to agree on the terms of a contract renewal. No amount of fan outrage made Patrick Dempsey want to stay on the show after his 11 years playing Dr. Shepherd. If that's the case, then Dr. Torres moving to New York with Penny gives writers the perfect out to write her off the show. She's already lost custody of Sophia, so there are significantly fewer obstacles to her staying in New York for good, if, say, Penny got another position there after her grant year is up.

Or, Callie and Penny could break up in New York and Callie could decide to stay because she loves the city. Or, Callie might fall in love with somebody else in New York and decide to move in with her. The possibilities in the Grey's Anatomy web of paramours are endless. And regardless of how her romantic life shakes out, it's possible that the prospect of moving back to Seattle, where she would be confronted head on with the loss of custody over her daughter, would be too much for her to bear anyway. Callie, like most Shondaland characters, is so often ambitiously avoidant of things that give her feels.

In any case, it seems up to the network to give Sara Ramirez the sweetest deal possible in order to keep her on. It doesn't seem like she wants to go, and for the sake of avoiding a fan uprising, hopefully the show doesn't want her to go either.