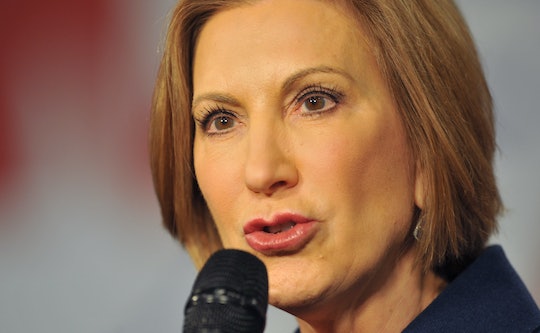 Will Carly Fiorina Appear on 'SNL'? It Would Definitely Be Interesting

In case you missed it, Donald Trump is slated to host SNL tonight — and it's gonna be huuuuge. If the hosting lineup is opening up to Republican presidential candidates, you have to wonder, will Carly Fiorina appear on SNL next? It doesn't exactly seem likely, considering Fiorina actually has a history of criticizing the show, and SNL skits featuring the candidate so far haven't been kind. But if she was to appear on SNL... well, it’s T.V. gold just waiting to happen.

That said, it does seem like Fiorina's campaign is starting to lose some steam, Based on a recent CNN poll, Fiorina's falling further behind her fellow competitors, placing ninth behind Donald Trump, Ben Carson, Sen. Marco Rubio, Sen. Ted Cruz, Gov. Jeb Bush, Gov. Mike Huckabee, and even Sen. Rand Paul. In fact, she was only one percent up from New Jersey Gov. Chris Christie. (Yikes.) So, if I were her, you better believe I’d be trying to get on Saturday Night Live. I’d be banging down the door. I'd be doing whatever it took to get back in the good graces of potential voters.

Last month, Fiorina shot ahead of her other competitors after a pretty solid performance during the second GOP debate (mostly because she could form sentences), jumping from three percent ratings to 15 percent in a matter of hours, according to a CNN/ORC poll. But ever since then — and largely in part to the fact-checkers who disproved many of Fiorina's claims during the debate — Fiorina's polling numbers have seen a sharp decline. If anything, she needs the publicity right now, good or bad.

Perhaps a deciding factor in whether or not Fiorina would entertain a hosting gig will depend on how The Donald's night goes. After al, Trump's support fell from 32 percent to 24 percent following the GOP debates. He may be holding strong in first place, but it sure seems the more opportunities Trump gets to speak in front of the nation, the more he blows it. Sure, he can work a crowd of diehard supporters, but can he share a stage with people who’ve made a career of sarcasm? He’s going into a tank of sharks, and, no, I don’t mean the actual Shark Tank. I mean that come tonight, Fiorina will gleefully be watching Trump get lampooned on live T.V., right along with the rest of us.

For now, who knows if she’ll be asked to host herself; but I for one sure hope she makes an appearance at some point. Or, at the very least, I hope Kate McKinnon dusts off her power suit and brings back her “Carly on a Harley” impression. That one's just stellar.