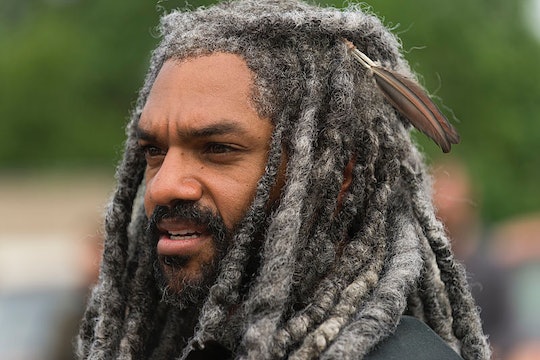 Will Carol & King Ezekiel Get Together On 'The Walking Dead'? They Have A Connection

Carol has been going through a tough time recently on The Walking Dead, but in Season 7 Episode 2 she started to make some new and intriguing connections. In particular, she seems to be sparking with the newly introduced King Ezekiel. Their first meeting wasn't exactly auspicious. She was playing Suzy Homemaker once again, and King Ezekiel was living up to his royal title. They were both putting on a performance, but once they started to peel back the layers, things changed. It seems like Carol and Ezekiel might actually understand each other really well. But will King Ezekiel and Carol get together on The Walking Dead?

In the comics, Ezekiel does start a romance with someone from Rick's group, but it's not with Carol, it's with Michonne. However, Michonne and Rick are pretty solid on the show, which makes it seem unlikely that they're going to be breaking up any time soon just so Michonne can get together with someone else. Carol died long ago in the comics and that gives her storyline on the show a lot of freedom. Nothing is predetermined when it comes to this character; it's all new. That means her getting together with Ezekiel is totally possible, and their chemistry definitely cemented the possibility.

At first, Carol was having none of it when it came to all the pomp and circumstance of the Kingdom. She found Ezekiel's entire way of life ridiculous, from the tiger to the honorific, and she fell back on her own facade to deal with it. She once again assumed the role of the silly and sweet housewife so that at the first possible moment she could make her escape without anyone being the wiser. However, it didn't quite turn out like that.

Ezekiel discovered her trying to slink away and revealed that he'd pretty much had Carol's number from the start. He could recognize her false persona because he had one of his own; his entire kingly facade is an attempt to inspire hope and belief in his people. In his former life, he was a zookeeper who dabbled in amateur theatre. Both of them have reinvented themselves in the new world they're still learning to navigate. "They both wear a mask," said actress Melissa McBride in an interview segment for Talking Dead. "And I love that Ezekiel was able to see through Carol's mask."

The episode ended with a scene that definitely seemed to hint at more for Carol and Ezekiel. She can't go back to Alexandria and she can't stay in the Kingdom, so Carol sets herself up in a house that appears to be midway between the two. Just as she's making herself at home, Ezekiel comes knocking with his pet tiger and a pomegranate – you know, just a casual drop by while he's out taking a walk.

Though it has only just started, something is clearly developing between the two of them. They understand each other, and that's a good foundation for a relationship to build on.