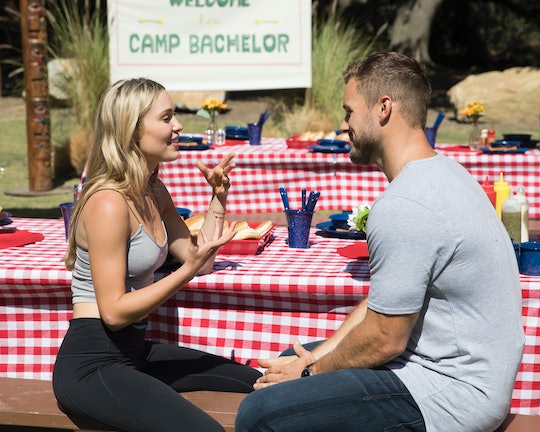 Colton & Cassie Had A Never-Before-Seen 'The Bachelor' Finale

It's hard to believe but after 23 seasons, The Bachelor actually had an unprecedented ending. The season finale showed the aftermath of Colton knocking on Cassie's door after sending his final two contestants home and the grand romantic gesture actually seemed to work. So Bachelor fans are left wondering: did Cassie and Colton get engaged? It was a question the show teased all finale long.

In the end, Colton finished his Bachelor journey by offering Cassie the final rose, a gesture he never got to extend in Spain because the season ended so strangely. She accepted and then they got to enjoy a final dance to a montage of their best moments while Air Supply serenaded them live. It was basically the furthest possible thing from a proposal, but on the bright side, Colton seemed to genuinely respect Cassie's desire to take things slowly.

After Colton broke up with Tayshia and Hannah G., the two were promptly whisked away in cars, both seeming angrier than contestants usually are at this stage of the game. That isn't a huge surprise, considering how unusual this particular finale was. But then, Colton returned to Cassie's room. Somehow, she was still in Portugal, and, when Colton explained what had happened with his two remaining contestants, Cassie seemed genuinely blown away by the gesture.

It effectively torched Bachelor convention and she seemed secure in Colton's promise to take it day by day, so she agreed to stay. Next up, Colton took her to Mallorca, Spain to introduce her to his family. It was pretty awkward, especially since they were expecting to weigh in on his two final picks for a possible proposal. Both his parents seemed extremely skeptical of Cassie, but Colton didn't waver in his commitment.

After meeting the family, Cassie got to go on one last daytime date with Colton, followed by a romantic dinner at night. And, of course, the evening was punctuated by the lost fantasy suite card — the one Colton never got to read out because Cassie broke up with him before he could ask her to join him. Needless to say, she said yes this time. Meanwhile, in the live studio audience, Chris Harrison had assembled an entire panel of Bachelor/Bachelorette alums to speculate whether they thought Colton would finally lose his virginity. But, in the end, he played it coy. The Bachelor claimed that a gentleman would never kiss and tell and he wouldn't reveal whether or not he and Cassie had actually had sex.

When the newly minted couple joined Chris in the studio, they were still together, which seemed like a good sign, and Colton had just moved from Denver to Los Angeles, where Cassie lives. Chris asked if they were planning on moving in together but Colton demurred. He admitted they were planning to travel a lot this upcoming year, and so being in the same city would help them cultivate their relationship despite their busy schedules. But he told Chris that they wouldn't be rushing cohabitating — or anything else.