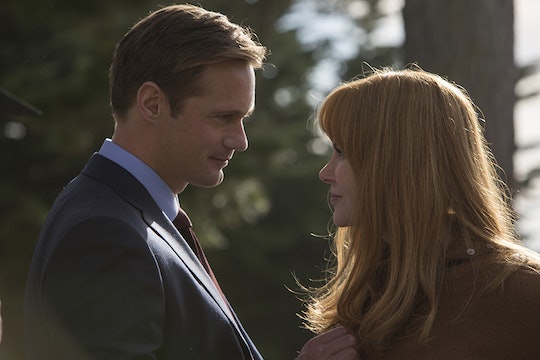 Every character on HBO's Big Little Lies has a secret — some more dangerous than others. Celeste, former lawyer and son of twin boys, is harboring a huge secret: her husband, Perry, is abusive. Celeste is now a stay-at-home-mom while Perry has a high profile job and often travels for work. When he's back home, he is easily agitated and does not hesitate to take his rage out on Celeste. While terrified of Perry, she does sometimes fight back. So will Celeste leave Perry on Big Little Lies? Their relationship terrifies us too.

We got a glimpse of Perry's abuse in the premiere episode, and it's only escalated since then. It seems that Perry operates by attacking Celeste — and citing her being so beautiful and enticing to other men as the cause, or her not consulting him in matters about their sons — then follows it up with a "honeymoon phase." They often have sex after their arguments or, as portrayed on Sunday night's episode, Perry gets her lavish gifts as an apology. He claims he will never do it again, but swiftly breaks that promise.

To others in the community who have no idea, they just see Celeste as a homemaker who got to quit her job and live a luxurious life thanks to her rich husband. They think she's "living the dream," aptly the name of Sunday's episode. Little do they know, though, just how difficult Celeste has it. After Perry's latest violent outburst, Celeste says she will leave him.

In previous episodes, Celeste discussed therapy. This episode, we actually saw the couple in a session. Perry downplays his abuse and says he just "grabbed her shoulders" one time, and he said that's when Celeste threatened to leave him. We know that's not true, but Celeste practically freezes — too stunned (and probably scared) to tell the truth. So, will Celeste stay true to her word and leave Perry if it happens again? Even if she wants to, it may be difficult. According to the National Network to End Domestic Violence, survivors are at an increased risk if they leave or are in the process of doing so. Furthermore, there are a myriad of other reasons why she might stay. As the National Coalition of Domestic Violence details, there are social barriers women may face when trying to leave abusers. There's also the fear and uncertainty that goes along with it.

Celeste may be earnest in her threat, but there are many reasons why she may not actually leave Perry. I hope that no matter what, though, her situation improves as the series continues.