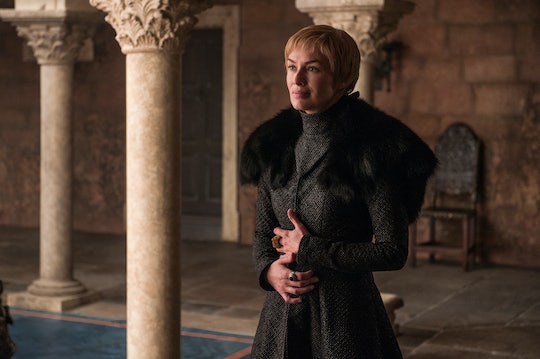 On Game of Thrones, Jon Snow and Daenerys Targaryen face threats from both the north and the south: beyond the Wall, the Night King is amassing an army that will be impossible to take down; at King's Landing, Cersei uses her immense forces and funding to make sure she can hold onto the throne she took. Both threats would be difficult enough to overcome separately, but what if they found a way to combine? Some fans have begun to theorize that Cersei will become the Night Queen on Game of Thrones, or at least team up with the White Walkers as a form of strategy.

While the visual of an icy, blue-eyed Cersei leading millions of dead soldiers would certainly be a memorable one, logistics make this theory tough to figure out. Cersei and the Night King preside over opposite ends of Westeros, with quite a lot of ground to cover before either of them could ever cross paths. And despite her undead bodyguard, Cersei has no reason to believe in the Night King — especially since Jon has struggled to get others to understand that this threat is real.

However, Jon's plan to bring a wight to King's Landing could spark something for Cersei that has her seeking out chillier allies.

It's not that unrealistic to imagine that Cersei might decide to join Team White Walker instead of helping to wipe them out. She's all about power at any cost, and you don't get more powerful than the Night King. He can create countless soldiers with just a touch and he's nearly impossible to kill. Even dragon fire seemed to have little effect on him in "Beyond the Wall." Cersei would rather die than lose, so if dying granted her even more power she might be very tempted.

There might have been a hint about Cersei becoming a White Walker in the Season 7 trailer, too. In the promo, Cersei sat down on the Iron Throne and exhaled a visibly cold puff of air. It could have been a metaphorical hint that winter has finally come to Westeros, but it could also be a sign that she's got a dark fate awaiting her — especially because the next shot was a closeup of the Night King's eye.

The trouble is still trying to work out how Cersei being the Night Queen would come to pass. The theory relies on a lot of things that haven't happened on the show yet, like Cersei's death and the Night King riding south. It's also unclear why the Night King would want to ally with the living; Cersei craving his power could make sense, but there isn't really anything he needs from her. The Night King even has his own dragon now. What more does he need than that, really?

The Night's Queen is a figure in the original legend of the Night King, though there's been no mention of her on the show. Perhaps Cersei will take over that role, but right now it seems a little too convoluted to be possible.