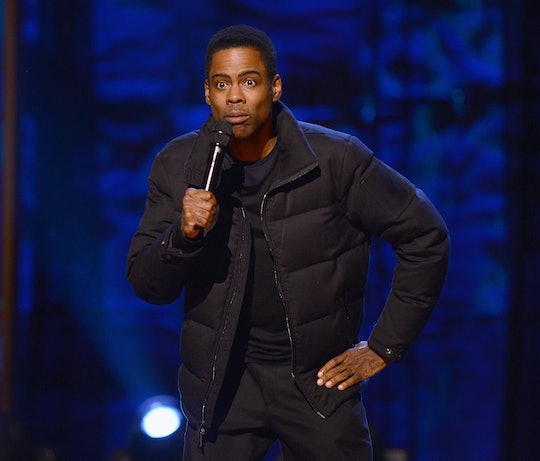 Will Chris Rock Boycott The Oscars? The Host Is Under Serious Pressure

Excitement for the upcoming Oscars has been overshadowed by the lack of minority nominees. With the Academy of Motion Picture Arts and Sciences under fire, the #OscarsSoWhite hashtag going viral for the second year in a row, and several celebrities voicing their disappointment — and even boycotting the event — the attention has shifted to Chris Rock, who is slated to host the event. Though the comedian is painfully outspoken, people are wondering whether Rock will boycott the Oscars. Though a boycott seems unlikely, Rock could definitely call the Oscars on its crap during the live event.

Some stars aren’t hesitating to give their take about the Academy’s diversity issue. Oscar winner Lupita Nyong’o Instagrammed her disappointment on Wednesday and Vulture reported that Selma actor David Oyelowo claimed that the nominations don't reflect him or the organization’s president at an event Monday night.

Even Academy president, Cheryl Boone Isaacs acknowledged the #OscarsSoWhite controversy in Thursday’s statement, stating that the organization has “got to speed it up” when it comes to embracing diversity, Entertainment Weekly reported. But Jada Pinkett Smith and Spike Lee are two celebs that plan to put action behind their words, and they announced this week that they won't be attending the Oscars, one in a formal boycott and one as something less targeted, according to the Daily Mail.

Though many are anticipating Rock will tackle this issue in his unique way, the call for him to forego the event altogether is getting louder. So loud that it’s making it difficult for the 50-year-old to ignore.

On Wednesday, TMZ reported that actor and singer Tyrese is urging Rock to step away from the Oscars. Describing it as a no-win situation, he told the website that "There is no joke you can crack to ever change the way we all feel." And this is an opinion that’s been backed by 50 cent, who also encouraged Rock to quit hosting the ceremony. On Tuesday, the Get Rich or Die Tryin’ rapper took to Instagram to make this thoughts known:

Chris please do not do the Oscar Awards. You mean a lot man, don't do it. Please.

But the question still remains: will Rock move forward with the event? Though he hasn’t weighed in yet, Naughty Gossip reported that despite the calls to quit, Rock still plans to host the Oscars. “Behind the scenes Chris is under extreme pressure to pull out. Many leaders in the black community think he would help progress be made if he quits his hosting job at the Oscars,” a source told Naughty Gossip. “Chris is listening to what they have to say, but thinks he will have a bigger impact by doing the show. He thinks it is easier to make a difference from the inside.” While he allegedly isn’t walking away from the gig, the source also claimed he planned to tackle the subject at the Feb. 22 ceremony.

But if Rock does decide to part ways with the Academy, it wouldn’t be the first time a host did so. In 2011, Eddie Murphy reportedly quit his position as Oscars’ host after the event’s producer, Brett Ratner, resigned for making homophobic comments. According to The Guardian, Tom Sherak, president of the Academy at the time, said: "I appreciate how Eddie feels about losing his creative partner, Brett Ratner, and we all wish him well." So, while it isn’t typical, it has been done.

In case Rock does decide to host, Ricky Gervais provided him with a few words of wisdom. “If I were @chrisrock, I wouldn't be considering boycotting the Oscars," Gervais, who recently hosted the Golden Globes tweeted on Tuesday. “'I'd be thinking 'this sh*t is live. I can do some serious damage.” And that might be exactly what Rock decides to do.