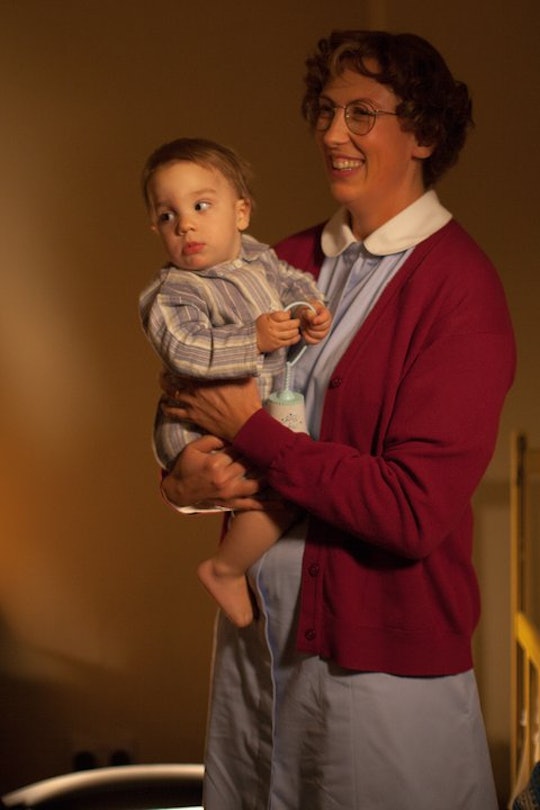 In the void left by Downton Abbey's end last year, Call the Midwife rose to become everyone's favorite British historical period drama. The BBC series, set in mid-century England, follows a group of midwives and nuns at Nonnatus House, a nursing convent. Since its 2012 premiere, the show has been beloved by fans for its memorable characters. With the return of Call the Midwife for its new season, many viewers are wondering whether their favorite characters will return with it. In particular, will Chummy be in Call the Midwife Season 6?

Camilla "Chummy" Noakes, the enormously tall and clumsy midwife and a fan-favorite character in the series, departed in Season 4, much to the dismay of fans. Before the fifth season premiered, back in 2015, Chummy's portrayer Miranda Hart confirmed that she wouldn't be appearing in Season 5 due to her hectic work schedule. Chummy hasn't been seen since, though at the time, Hart did leave open the possibility of a future return. "I am very sad not to have been able to be involved in series five but, on the plus side, maybe Chummy can come back in the next series an enlightened, crazed '60s hippy, having an affair with Paul McCartney. Watch this space," Hart joked when confirming the sad news to The Mirror.

Chummy was last seen in Season 4 leaving Poplar behind with her husband and son to head over to the Mother and Baby Home. Last April, fans were abuzz with excitement when it was announced that Chummy would be making her triumphant return to the show.

According to The Guardian, Hart was set to appear briefly in the 2016 Christmas special and then take center stage once again in the sixth season. Unfortunately, in August, it was revealed that those plans had fallen through, when Hart wound up needing to pull out of those scheduled appearances, once again citing her busy work schedule.

Apparently, the sudden reversal happened at the last possible minute and show creator Heidi Thomas needed to rework the entire season's plot for the character's continued absence. "We were thrilled when Miranda approached us [to return], and I storylined the series for her, but at relatively short notice she had to withdraw," Thomas told Radio Times. "We were hopeful right up to the end that we could make it work, but we couldn’t."

While that news is definitely disappointing, it still remains a possibility that fans will see Chummy again at some point in the future — Call the Midwife has already been renewed for seventh, eighth, and ninth seasons.

Call the Midwife Season 6 will have its U.S. premiere April 2 on PBS.