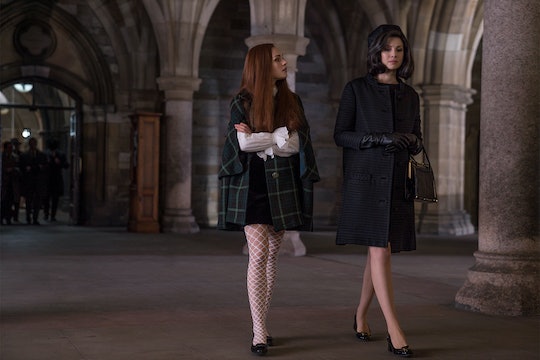 Claire & Brianna Still Have More Story To Tell On 'Outlander'

Outlander fans know that it's only a matter of time before Claire finally heads back to the stones and back to Jamie after their torturous 20-year separation. But what about the other love in Claire's life: her daughter? Will Claire ever see Brianna again on Outlander? These two are about to be separated as well.

Instead of having Brianna show up as an adult in the third installment as she does the books, the showrunners decided to change the structure of the story somewhat, giving viewers a glimpse into Brianna's childhood, and introducing her as a strong-willed character in her own right.

After Frank Randall dies, and Claire convinces Brianna that she really did travel back in time 200 years and fell in love with a Scotsman who is, incidentally, her real father, Brianna decides to help Claire research Jamie Fraser. If Claire is going to go back to him, they need to establish that he's alive and find out where he is. So far, Brianna's major role in the story has just been to help Claire find her way back to Jamie. But for a character as big as this, it seems very unlikely that this where her story ends and that mother and daughter will be separated forever. Warning: book spoilers ahead!

Luckily, if you've read ahead, you'll know that this is not the case at all. Even though she says she's not going to, Brianna continues to research her parents (hey, wouldn't you?). In her research in the fourth book Drums of Autumn she finds that Claire and Jamie's house burns down, so Brianna decides to go back in time to warn them and potentially save their lives, followed, of course, by Roger Wakefield. It is a long, treacherous journey, and both Brianna and Roger go through every sort of tribulation that series author Diana Gabaldon could think to throw at them. Not the least of these issues is figuring out how to be a family with each other and with Claire and Jamie.

The reunion between Brianna and Jamie is particularly emotional, considering the father and daughter pair had never met before. All of their emotions are compounded when Roger appears and things get... well, complicated. One reunion that is not confusing at all, however, is the one between Brianna and her mom. Brianna's issues with Claire got resolved when Claire started telling her the truth about her father and when the two of them began looking for historical records of Jamie. It's a good thing the two of them got over their issues because Brianna definitely needs her mother as an advocate when dealing with the feelings surrounding her father.

But all of this action most likely won't be happening on screen until Season 4, after Claire has already been with Jamie for a time and it's Brianna's turn to go through the stones and have adventures. In interviews, Sophie Skelton, who plays Brianna, as well as Richard Rankin, who plays Roger, have said that they are most looking forward to the fourth season, because this is when the stories for their characters take on an epic quality. "I think book four is largely why we wanted to do the roles as it is really where you see Roger and Brianna come into their own, so we are very much looking forward to filming it," Skelton said to DigitalSpy. She later added:

And it's the same this season, one of the hard things is that you want to show aspects of her personality like that but you don't want to bring it in too soon, because many people haven't read the books and you don't want her to be one-dimensional, you want people to see the layers of Bree unfold and see more and more of the personality.

Is it too early to be looking forward to Season 4? Because I already can't wait.