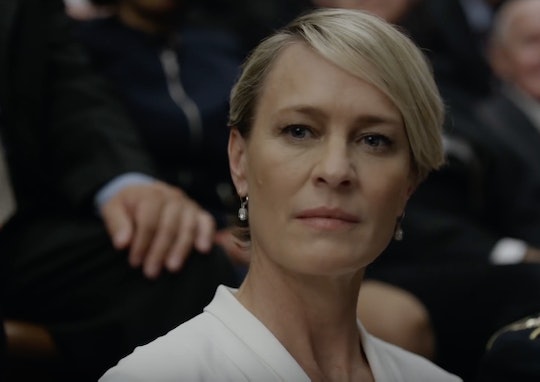 Will Claire Run For President In ‘House of Cards’ Season 4? She'll Definitely Step Up Her Game

As House of Cards changes gears and launches into its fourth season on March 4, many fans are wondering if Claire Underwood, the fictional first lady on the Netflix show, will run against her husband in Season 4. (Can you imagine adding that kind of drama to the madness of our current elections?) An under-appreciated Claire left her husband in Season 3, and the show foreshadowed some serious relationship drama when Frank's final word of the season was simply, "Claire." In Netflix's trailer for Season 4, fans also saw the briefest clip of Claire giving a press conference. Could she be announcing her candidacy? Will Claire run for president in Season 4?

The Underwood's separation will definitely play into the Season 4 plot line, according to the show's creator, Beau Willimon, who spoke to The Hollywood Reporter. Claire has always been an important part of Frank's public persona, and she undeniably contributed to his success behind the scenes, as well. Will Frank's bid for re-election survive a divorce? Can he run successfully without Claire's help? "That's one of the big questions going into season four," Willimon told the Reporter:

A lot of the strength of the show is based on the strength of that marriage. But as soon as we began to explore that, we realized there was no turning back. We also realized we'd laid the groundwork in the previous two seasons for this conflict between Francis and Claire, and the more we began exploring it, the more inevitable it became. And the more exciting it was for us to travel that emotional terrain.

Season 3 certainly saw tension building between the couple, as well, and you could see it straining Claire. In one episode, according to Cinema Blend, Claire told Frank, "I should have never made you president." (Because we all know who the power truly lies with here.) Claire also began to realize that she'd been a pawn in Frank's game all along — and that if she stayed with him, her biggest achievement would be becoming first lady.

Claire clearly has greater ambitions than that, and, with her impending separation from Frank, fans can definitely expect to see the FLOTUS make a big move in Season 4. Whether that's diving back into her non-profit work, harming Frank's campaign, or aiming for the White House herself, it's likely to leave viewers with just as many cliffhangers as always. Separating the "unsplittable atom of American politics" that is the Underwood power will definitely challenge characters on House of Cards in new ways, and I have a feeling the writers will have fun with this season.