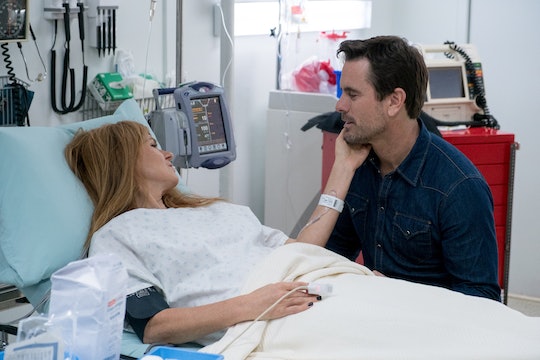 It's been a traumatizing year for Nashville fans. First, their beloved country musical drama got axed from ABC after four seasons. Then, execs began the arduous task of shopping it around to other networks for a potential revival. And finally, CMT picked it up for Season 5 with new showrunners and it premiered with writing so good that the show is universally praised for having a "creative resurgence." But now, on top of all of that, the series has gone on to kill off its main character Rayna Jaymes. So will Connie Britton return to Nashville? She made it quite clear in numerous interviews that Rayna is very, very dead.

Britton has been on a postmortem press tour of sorts following the death of her character in Episode 9, titled, "If Tomorrow Never Comes." After narrowly escaping the clutches of her stalker, Rayna was hit by a truck (literally) while riding home in the back of a police car. She became gravely injured, but seemed to be recovering fine in the hospital when things suddenly took a turn for the worse. Her organs wound up shutting down and she died in the ICU surrounded by Deacon, Maddie, and Daphne. It's actually the second serious car crash Rayna has sustained in the series. There was a previous cliffhanger ending while the show was still on ABC where Deacon got Rayna into an accident because he was driving drunk.

Britton appeared on The Late Show with Stephen Colbert following the episode, where the host asked if she was really dead or if Rayna might come back as a zombie or an evil twin. "She's really dead," Britton sadly admits. "I'm sorry, but I gotta tell it like it is. She's really dead. But, I think the twin sister idea is not bad! I mean, it's Nashville, anything could happen."

She also confirmed in an interview with TVLine that Rayna comes back for at least one episode, presumably in a flashback. "I do pop back in in after Episode 9," she revealed. "And Nashville‘s always going to be important to me, so I’m totally open to whatever as time goes on. But it is really hard to say goodbye to this character."

In the same interview, she admitted that the reason she felt ready to move on from the show had to do with her other creative aspirations. Britton expressed that she wanted to maybe get in on a new series at the ground level and work more with production and development. It seems like maybe she could be persuaded to come back and direct an episode of Nashville in the future. But as far as her onscreen presence goes, aside from some tender flashback moments, it seems like we really are done with Rayna Jaymes.