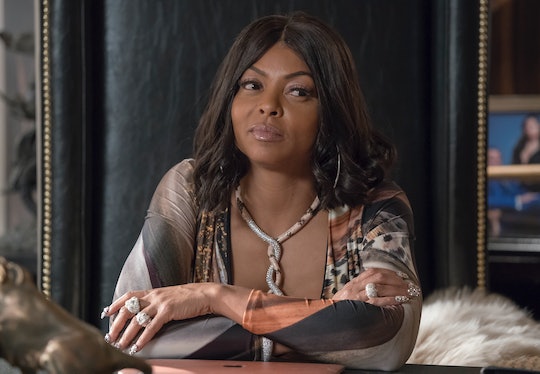 Cookie's Life Could Be In Serious Danger On 'Empire'

As viewers have seen in previous seasons, Empire isn't afraid to go there. For instance, Lucious almost died and lost his memory — and he didn't snap out of it immediately like what tends to happen on other shows. Now, based on the latest promo, it looks like Cookie is about to go through (even more) hardship. But will Cookie die on Empire? After last Wednesday's episode, her fate seems to be up in the air.

Like I said, there have been death scares before on Empire; up until now, Lucious has been the most dramatic. Even then, the show has gone so far as to kill off a few major characters. Andre's wife Rhonda and Lucious' half-brother Tariq are two prime examples. But while those deaths were certainly intense and made Empire live up to its reputation of being a hip-hop soap opera, neither of these characters were Cookie. Cookie, and of course actress Taraji P. Henson, are practically synonymous with Empire. Could producers really kill her off?

On the last episode of Empire, "Without Apology," the focus of the final few minutes was originally on Lucious' trauma. Andre (finally) admitted that he was partly responsible for the accident that almost killed Lucious and Cookie (and that took Lucious' leg and memory). Andre even went so far as to give Lucious a gun, and told him he could do with it what he needs to do.

Lucious didn't take the opportunity to kill Andre (thankfully), though he did attack him. The rest of the Lyons rushed in and Lucious collapsed into Cookie's arms. He said things will never be the same — and that's pretty much spot on. Cookie tried to get Lucious to promise not to hurt Andre when it happened: she faltered and had to be helped onto the couch. She couldn't feel her right arm, which is a sign of a heart attack. Her last words before the camera cut to black were: "I can't catch my breath."

What!? Another Lyon in turmoil!? That appears to be the case. Will Cookie rise above this, like Lucious did (well, at least partially) from his near-death experience — or will she join the list of deceased Empire characters?

Honestly, I'd bet money on the former rather than the latter. Even though Henson has been killing it on the big screen lately, there hasn't been any news that she's leaving Empire. There's a good reason for that too: she practically is the show. Okay, at the end of the day it is an ensemble, and Terrence Howard does have a huge role as Lucious, but come on. Cookie is the fiercest, most gifable character on Empire. It wouldn't be the same show with any member of the Lyon family, but Cookie especially.

In fact, it seems that Henson has a say in how some of the production goes. Half of the mid-season premiere of Empire was shot in one take — because Henson said so. According to executive producer Brett Mahoney, he asked the actors (Henson as well as Howard and Demi Moore, who plays Lucious' evil nurse Claudia) how they should go about shooting an intense long scene. Mahoney explained how the conversation went to The Wrap, stating:

I said, 'How do you guys want to tackle this? You want to do it bit by bit?...And Taraji turns around and says, 'Well how are we gonna do that? No, no, no. Let’s just shoot the whole thing as one play and you just shoot it over and over again. That’s how we’re gonna do it.'

With that much influence, I don't think Henson would stand for Cookie going down like this. What exactly will happen to Cookie is unknown right now, but I'm pretty confident that she will live to run Empire Records another day.