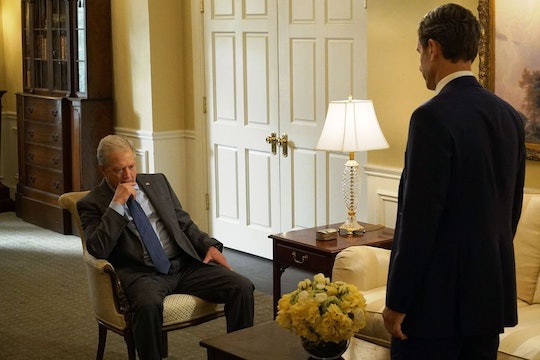 An Impeachment Could Be Underway On 'Scandal'

Scandal's sixth season premiered a week later than its intended return, which coincided with the eve of President Trump's inauguration. After the episode aired, the parallels between the episode's election night assassination and the real-life inauguration were more than a little spooky. Although the episode was shot (no put intended) six months ago, the delay in airing was probably for the best. The culprit behind Scandal's newly elected president's murder? His own Vice President (or so we are led to believe), Cyrus Beene. It has fans wondering: will Cyrus be impeached on Scandal? Or is Olivia Pope's deeply rattled conspiracy theory just a paranoid hunch that's spiraled out of control?

She did get a tiny clue that Cyrus was behind the assassination of Frankie Vargas, which, as his running mate, cleared the way for Cyrus to inhabit the Oval Office come Inauguration Day. There was a deleted voicemail on the FBI investigation tip-line from one of the Vargas campaign's young, female staffers naming Cyrus as the orchestrator of the hit. Olivia delivered him a hushed threat, promising to expose him, but we don't really see Cyrus acknowledge the crime, nor do we have any other evidence pointing to him. So convicting him as Vargas's killer and seeing him impeached as a result seems like a long shot at this point. Plus, he carries the felonious secrets of most of the people who'd want to see him go down.

The other road to impeachment, or at least an electoral college vote upset, is pursuing the logic that no one technically elected Cyrus to be President Beene from day one in office. They elected Vargas. We see Fitz struggle with whom to guide the American people's support behind in the season premiere. If he supports Cyrus, he risks backlash because no one actually voted for him, and if he supports Mellie to replace Vargas as the runner-up in terms of actual votes, it looks like nepotism.

He does finally settle on supporting Cyrus, just as Olivia gets the proof she needs to implicate (or as least investigate) his involvement in the Vargas assassination. This severely limits her capacity to dig deeper into his involvement, considering the boosted security around him as the presumptive president-elect. She'll likely have to maneuver her investigation quietly and carefully in order not to get herself into trouble. But I wouldn't put it past Cyrus to charge Olivia with treason, obstruction, conspiracy, or anything else he thinks might stick if she makes too much noise trying to take him down.