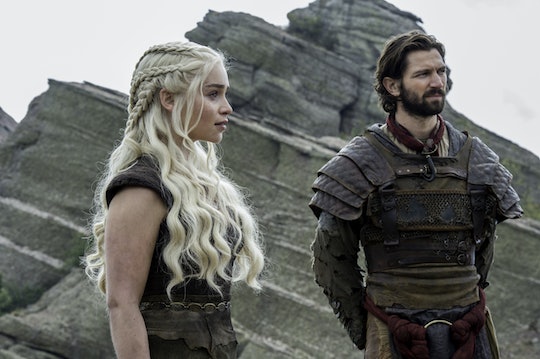 There's One Way Daario Could Still Return To 'Game Of Thrones'

On Game of Thrones, Daenerys Targaryen's long-lost baes have been showing up left and right, which leads me to wonder about one particular guy that hasn't been seen yet this season — her sell-sword ex-boyfriend Daario Naharis. So will Daario return to Game of Thrones? The last time viewers saw him, the Dragon Queen was leaving him in Meereen to take care of things while she took over Westeros, which is most definitely a break-up line I haven't heard before.

If you remember, Daenerys first met Daario Naharis, lieutenant for the mercenary company the Second Sons, back in Season 3 when he was blonde and played by an entirely different actor. He returned as Michiel Huisman in Season 4, and the two had a very steamy romance for two seasons while Daario advised the Queen and helped her run the city-state of Meereen. But when it was time to sail for Westeros, Tyrion advised Dany that optics-wise, it wouldn't be a great political move to bring along her mercenary boyfriend. She agreed and told a heartbroken Daario he would not be joining her. Afterwards, she confessed to her Hand that she said goodbye to a man she thought she cared for and "felt nothing." Way harsh, Dany. I mean, how could you not feeling anything for this guy?

But a good rule of thumb on this show is that unless you literally see someone's disemboweled corpse, there's a good chance you'll see them again. Gendry, for example, returned to the action after two seasons of rowing. And Ser Jorah really did find a cure for greyscale — well technically Sam found the cure — and returned to Daenerys' service as he promised to do. So it's possible that Daario could show up again either in the finale or in Season 8. When asked whether he knew if his character Daario was returning, Huisman responded, "Yes I do and I'm not supposed to spoil that." Gee, thanks.

One theory about how he could make his way to Westeros is through another Queen, Cersei. Remember that Daario is a sell-sword, meaning he doesn't necessarily fight for causes, he fights for money. He made an exception for Daenerys because he believed in her and also because he loved her and that is what supportive boyfriends do. Cersei, you will remember, has lost a big chunk of her Lannister army and plans to use her relationship with the Iron Bank to hire an army of sell-swords. She mentions the Golden Company, but perhaps that could include Daario? He could still be helping Meereen settle into their new order. Or maybe Meereen is fine and he's moved on to more mercenary work.

If this is the case and Daario is hired to lead Cersei's off-the-rack army, I can only imagine how uncomfortable that reunion with Dany is going to be. She's got a new man (we all agree the Jon Snow thing is definitely happening, right?) and he's fighting for her nemesis. Yeah, that's going to beat any reality show reunion I've ever seen. I can't wait, obviously.