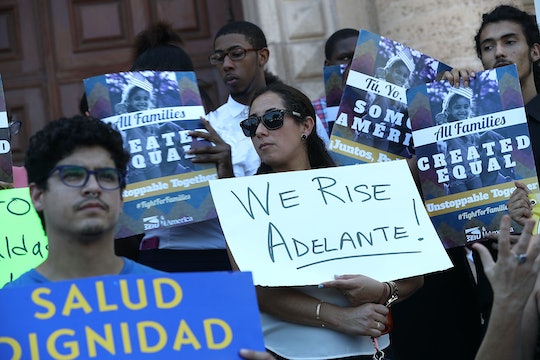 DACA Is Safe — For Now

The first order of business for President Donald Trump and his administration this week — aside from denying real, verifiable facts about turnout for his inauguration — seemed to be to chip away at some of his predecessor’s signature policy achievements. On Friday, Trump took his first steps toward repealing the Affordable Care Act. Then on Monday, he flexed his executive authority on a slate of directives to federal agencies related to trade, abortion access, and federal hiring. But missing in the flurry of executive orders coming from the Oval Office was action on Trump’s biggest, most controversial campaign promise: immigration reform. Democrats and advocates had braced for Trump to take immediate action to eliminate the deferred action program, or DACA, a set of executive actions signed by President Obama protecting some 750,000 immigrants brought to the United States as children. But, as of Monday, those concerned about how DACA would be affected under a Trump presidency got their answer. Trump seems to have given the program a temporary reprieve.

Anyone paying even cursory attention to Trump on the campaign trail would expect him and his team to take up immigration issues almost immediately. Trump, whose campaign statements ranged from bizarre to outright vile, ran on a platform centered on stoking anti-immigrant sentiment. Among his most-repeated promises were plans to ban Muslims from entering the United States, build a wall between the United States and Mexico, and deport millions of undocumented immigrants. Trump called the DACA program “illegal amnesty” and promised to shut it down as soon as he took office.

But during his transition to the White House, Trump and his team seemed to soften those statements — to a degree. After Trump’s election, his team gave little information on Trump’s plans for immigration reform, according to Talking Points Memo, which worried advocates and families. On Sunday, White House Chief of Staff Reince Priebus told Fox News that Trump won’t undo DACA using his executive authority:

I think we’re going to work with the House and Senate leadership, as well as to get a long-term solution on that issue. I'm not going to make any commitments to you, but … I'm obviously foreshadowing there a little bit.

I think the president has been clear that he is going to prioritize the areas of dealing with the immigration system, both building the wall and making sure that we address people who are in this county illegally. First and foremost, the president’s been very, very clear that we need to direct agencies to focus on those who are in this country illegally and have a record, a criminal record or pose a threat to the American people. That’s where the priority is going to be.

Whether Trump would expect agencies to include the thousands of DACA young people with minor criminal records or who have orders of removal in that broad definition remains unclear. But as of Monday, the federal government was still accepting and processing DACA applications, Politico reported. Without new orders from the president, the Trump administration is simply continuing the Obama administration’s immigration policies — for now, at least.