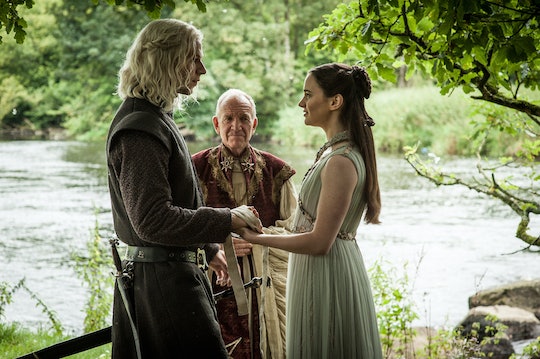 This 'Game Of Thrones' Secret Is Really Going To Hurt Daenerys

The Season 7 finale of Game of Thrones was titled, "The Dragon and the Wolf," and it turns out that meaning was two-fold. While the show delivered a flashback to Jon Snow's parents, Lyanna Stark and Rhaegar Targaryen, getting married, it also showed Daenerys and Jon consummating their love. This confirmed what most fans already knew: Jon is the rightful heir to the Iron Throne... and he just slept with his aunt. (Awkward.) Bran told Sam they have to tell Jon the truth, but will Daenerys find out Jon's parentage on Game of Thrones? If she does, she's probably not going to be very thrilled out it.

Daenerys, Jon, and Tyrion are all currently on a boat heading towards Winterfell, where Jon will presumably finally be told who his real parents are. Knowing Jon, he won't be able to keep this information to himself and he will most likely reveal the truth to Daenerys, no matter how much that will inevitably change their relationship. However, will Dany even really believe this story about him being her deceased brother's son?

At best, the only proof Bran and Sam have to back up this claim is the maester's journals that reveal he annulled Rhaegar's marriage to Elia Martell and wed him to Lyanna, and that's only if Sam and Gilly brought the journals with them.

Even if they have the journals, though, all that proves is Rhaegar and Lynna got married. It doesn't prove that Lyanna had a child and that the child was Jon. For that, all they have is Bran's word and while Bran can easily prove he truly is the Three-eyed Raven and can see everything that's happened in the past and present, Dany may not want to believe it.

She could easily dismiss what Bran says as lies to help his brother (cousin) take the throne from her. Hopefully, Daenerys is more rational than that, though. Still, even if she does believe it, Dany's not going to be happy about it. Her whole story arc throughout the series has been about taking back the Iron Throne. Now she's just going to lose it because the man she just slept with is apparently her nephew? That's not fair. Plus, does Jon even want to be king?

Besides the questions about the line of succession, there's, of course, the awkwardness of realizing they're aunt and nephew. While they've only slept together once, anyone with eyes could see that these two have developed real feelings for each other. How do they rectify the fact that they're related and possibly in love? Do they just accept the fact that Targaryens have historically been into incest and just keep going forward with their relationship? Or do they put an end to it before it even really begins? Unfortunately, fans have a long time to wait before they'll get answers to any of these questions.