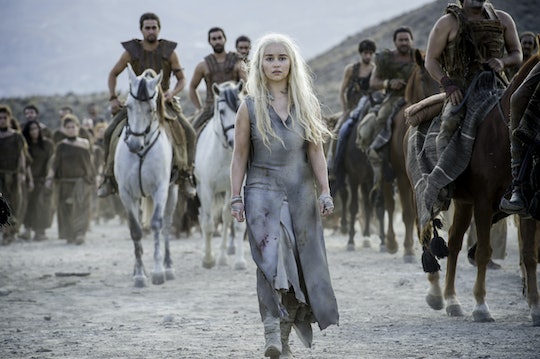 Will Daenerys Get Out Of Vaes Dothrak On ‘Game Of Thrones'? Her Fate Is Still In Question

Season 6 of Game of Thrones finds Daenerys ripped away from Meereen and stuck in the Dothraki holy city, doomed to live out her days among her fellow Khal's widows. But will Daenerys get out of Vaes Dothrak on Game of Thrones? It's actually not quite a foregone conclusion that she will be able to stay among the dosh khaleen.

When khals die, their khaleesis return to the holy city of Vaes Dothrak to live out their days confined to a temple, acting as seers who interpret omens for the Dothraki, according to Vulture. Basically, once you're the widow of a Khal, you become a de facto member of the Dothraki religious leadership. Dosh khaleen translates in Dothraki to "council of crones," and these are the women who preside over the Dothraki people.

Daenerys should, by virtue of her status as a widowed Khaleesi, become a part of this faction. Or, as Dany probably sees it, she's doomed to, now that she's been captured by the Dothraki. But we get some hints in the Season 6 episode "Oathbreaker" that she might have a way out.

The widow of Khal Savo, whom we saw in the background of Season 1 during the scene where Daenerys eats the stallion's heart, appears to be the leader of the dosh khaleen. She is the one who stops Daenerys in her tracks as Dany rattles off her many titles. The only identity that matters here is that Daenerys was a Khaleesi.

"You will learn as well," Savo's widow tells Daenerys, "if you are fortunate enough to stay with us."

Dany is openly confused. Hasn't she become dosh khaleen now that she's in Vaes Dothrak? As Savo's widow explains, a khaleesi is supposed to join the dosh khaleen immediately after the death of her Khal. She adds:

"But you went out into the world. That is forbidden. All the khalasars have returned for the Khalar Vezhven. They will decide which cities will be sacked and which tribes will be enslaved. And now they must decide what to do with Khal Drogo's silver-haired widow. With luck, your place will be here with us, Mother of Dragons. It is the best you can hope for now."

While being excommunicated from the dosh khaleen could provide Daenerys with an opportunity for escape, the Dothraki may also have a more sinister demise in store for her if they decide she has terribly dishonored her Khal. It's up to Ser Jorah to catch up with her in time now.