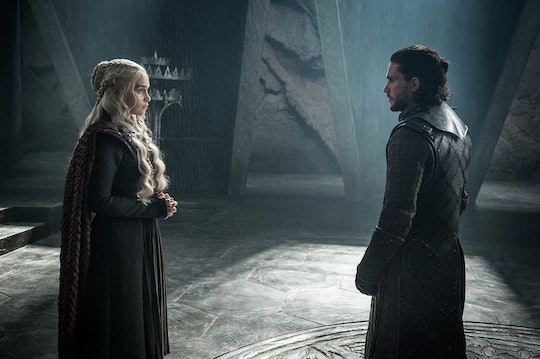 Daenerys and Jon Snow's first meeting may not have been what fans were expecting, but it was pretty funny. The two got off to a rocky start when Jon refused to bend the knee to Daenerys. However, there were a few moments during their first introduction that led to many memes. One of which was when Ser Davos almost let it drop that Jon died and came back to life. Jon cut him off before he got to all the details, but the mention was enough to leave Daenerys with questions. So will Daenerys learn about Jon's resurrection on Game of Thrones? He'll probably tell her eventually.

As was to be expected, Daenerys and Tyrion didn't really believe Jon's claims about the army of the dead and the Night King. That's when Ser Davos chimed in to talk about why he loves Jon so much. Or, rather, to explain why they should trust Jon. (Either way it was pretty adorable.) However, while listing Jon's accolades and talking about how he got Northerners and Wildlings to trust him, despite being a bastard, Ser Davos got a little carried away. "[Jon] fought those things for the good of his people," he said. "He risked his life for his people. He took a knife in the heart for his people. He gave his own—"

It makes sense that Jon didn't want to drop this truth bomb, right after trying to convince Daenerys there was an army of the dead on the way. If she had trouble believing White Walkers exist, she definitely wouldn't have believed Jon had died and was then resurrected. Moreover, how could he warn them about an army of the dead approaching and then reveal he was actually dead once. Daenerys and Tyrion would've been so confused, it would've just made this conversation even more difficult.

Even so, this is definitely a topic that will come up again later. Some fans speculate this secret will be revealed when Daenerys and Jon hook-up and she sees the scar by his heart. However, though plenty of fans hope this happens, there's actually no guarantee Daenerys and Jon will get together.

Instead, it's more likely that Daenerys will just ask Jon about it at some point. Jon can't keep this a secret forever. Everyone in the Night's Watch knows about it, his sister knows about, and one would guess the Northerners know about it as well. Besides, Daenerys has walked through fire twice and came out unscathed, not to mention the fact that she has dragons. If anyone should be able to believe Jon was resurrected, it should be her.