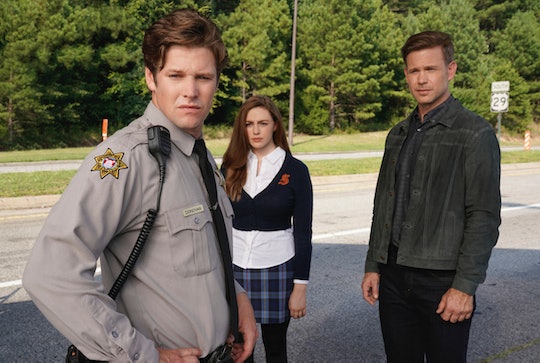 Fans of The Vampire Diaries and The Originals were elated when CW launched its spin-off series, Legacies. The show follows the next generation of supernaturals in Mystic Falls, including Caroline and Alaric’s twins Lizzie and Josie, and Klaus and Haley’s daughter, Hope. The series brought back a few beloved TVD characters, but there are two current Mystic Falls residents fans are still eager to see. So, will Damon and Elena ever be on Legacies?

Unfortunately, showrunners haven’t announced any plans to bring Elena or Damon back to Legacies, but they have been dropping hints about their family throughout the first season. The biggest Easter eggs came in Episode 10, when the Jinni grants Lizzie’s wishes to get rid of Hope and puts her in different alternate timelines. In one timeline— where Hope and Klaus haven’t funded The Salvatore School — Josie actually mentions Damon and Elena. “Damon Salvatore has been as generous as he can be,” she tells Lizzie. “But he and Elena have kids of their own that they need to take care of.”

In another timeline— when Josie and Lizzie are attending Mystic Falls High School because Lizzie wished The Salvatore School out of existence — Josie tells Lizzie to steal Alaric’s watch and casually mentions the name of Damon and Elena’s daughter. “Just get dad’s watch like you promised,” she tells her. “Stefanie Salvatore’s dad gave him the watch.” TVD fans quickly caught the name, Stefanie, as a tribute to Damon’s brother Stefan, and realized that Damon would have given Alaric the watch because they were best friends on TVD.

There are plenty of reasons why TVD fans would expect to see Damon and Elena make an appearance on Legacies. In Episode 12 of The Originals, when Hope and Elijah are meeting in downtown Mystic Falls, the camera shows a nearby storefront that reads “Elena Salvatore, M.D..” This is confirmation that Elena currently works and lives in Mystic Falls. Plus, considering that The Salvatore School building is Damon’s family home, Alaric is Damon’s best friend, and Caroline is Elena’s best friend, it would make sense that they would pay the school a visit.

However, as of now, it looks like Damon and Elena will only be featured in Legacies by name. In an interview with TV Guide, actress Nina Dobrev (Elena) revealed that she is just too busy with her current role on the CBS sitcom Fam to make an appearance on Legacies. "I have a full time job here, so I don't know that I can," said Dobrev. "But I'm excited and happy to see that the show is living on, and it's a testament to the show itself that people love it so much and have a hunger for it and have an appetite that they need to satiate. So spin-off after spin-off — that means it's a good thing. Julie Plec is the new Shonda Rhimes; she has like 95,000 shows on the air. She's a force."

Meanwhile, Ian Somerhalder (Damon) is busy with his role as Dr. Swann in a new vampire show for Netflix called V-Wars, and in an interview with HollywoodLife, he revealed he’s not going to be on Legacies. “While I have immense gratitude for Vampire Diaries and all involved, V-Wars provides a space for everything I couldn’t do on Vampire Diaries,” said Somerhalder. “Damon Salvatore was such an incredible character to play for so long — [I have] no plans to be on Legacies, but I do miss that Alaric.”

So, it doesn’t look like Damon or Elena will be making cameos on Legacies anytime soon, but considering this is probably just the first season of many, there’s a possibility that they come back at some point in the future. For now, fans will just have to enjoy all the Damon and Elena name dropping they can get.