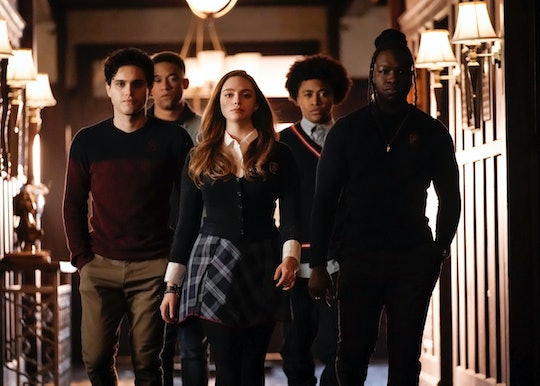 Fans Want To See Damon and Elena's Kids On 'Legacies'

Fans of The Vampire Diaries and The Originals were excited to see some of their favorite characters come back on The CW’s spin-off series, Legacies. But the main players of the TVD universe — Damon and Elena — have only been mentioned by name so far. Knowing that Elena is running her clinic in Mystic Falls, and possibly raising a family there, fans are wondering, will Damon and Elena’s kids be on Legacies?

It’s too soon to tell for sure, but considering the fact that The Salvatore School for the Young and Gifted bears Damon’s name, and was once his home, it is possible that he may want to send his kids there. At the end of TVD, both Damon and Elena became human, and went on to live normal human lives. Elena went to medical school and started a family clinic in Mystic Falls, and it’s possible that she and Damon have kids that they are raising in town.

There’s no way of knowing, but their kids could have a supernatural gene that would warrant their need to attend the Salvatore School. Alaric, the headmaster, is one of their best friends, and he could easily bring their children into the school if needed. However, if Damon and Elena’s kids are human, they could show up as students in a rival human school, like Mystic Falls High, and compete against the supernatural students of The Salvatore School.

Of course, this is all just wishful thinking on my part, and the showrunners haven’t revealed any details on Damon, Elena, or their kids showing up on Legacies. Not yet anyway. When talking to CinemaBlend, Legacies creator and showrunner Julie Plec confirmed that Elena and Damon are together in Mystic Falls, but she said it might be a while before fans get to meet their kids, who are probably still very young.

“I know that Damon and Elena are still together,” Plec told CinemaBlend. “Like if you guys go visit Covington, Georgia where we shoot Mystic Falls — there's a storefront that says Dr. Elena Salvatore. It's a family clinic. So, she has her family clinic in the town square. You know I think that when Damon and Elena finally had children, they'd be younger kids by now. So maybe the spinoff of this spinoff can be the Salvatore children.”

However, in a recent interview with TV Line, Plec revealed that Season 1 is gearing up for a momentous ending, and I’m sure TVD fans like myself are hoping it has something to do with Damon and Elena. “The end of the season truly brings everything to a head,” she said. We leave a lot of questions, but it’ll be very clear that we’ve been building to a big reveal and a big moment, and we’re really excited about the cliffhanger.”

As much as I hate cliffhangers, I’m really excited to see what Plec has planned for Legacies. Knowing that Elena and Damon are living right around the corner from all the action is exciting, and I’m sure fans can’t wait to see them — or their kids — at some point down the line.

New episodes of Legacies premiere on Thursdays at 9 p.m. ET on The CW.