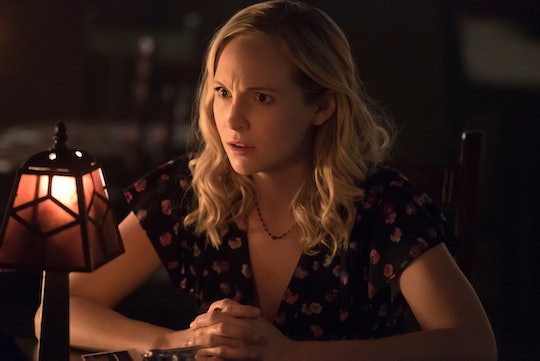 Caroline Could Be In Danger On 'TVD'

It's never a dull day in Mystic Falls and it seems next week is going to be particularly gruesome. Now that Cade has come back into the picture, it was to be expected that even more trouble was on the horizon, but based on next Friday's promo, a beloved character will be in grave danger. (Particular emphasis on the "grave" part of that sentence.) So will Damon kill Caroline on The Vampire Diaries? Cade has presented him with quite the ultimatum.

As we all know by now, Cade is hell bent (get it?) on getting as many souls to join him in the after life as possible. However, he also has a penchant for mental torture as well, which is probably how he came up with this latest dilemma for Damon. Basically, this former bad boy has a big decision to make: he can either kill a thousand more people and present them to Cade by a designated time or he can just present him with one soul: Caroline's to be exact. So the question is — will Damon be willing to sacrifice a thousand other lives in order to save his friend (not to mention his brother's fiancée) or will he do the logical thing and save the many over the few?

Now, before anyone starts panicking too much about all of this, let's not forget that TVD has a knack for getting its main characters out of sticky situations. I mean, just think of all the times they were almost all killed and managed to find a way out of it at the very last minute. Odds are Caroline's fate will follow a similiar pattern. So even though all hope may seem lost at first, rest assured this Mystic Falls gang will do everything within its power to make sure our beloved Miss Forbes makes it out of this alive. Well, as alive as a vampire can be.

That's not to say that we should totally right the possibility off. It was only a few months ago that the series killed off Tyler Lockwood, so the writers aren't necessarily concerned with keeping characters around, especially considering that this is the show's final season. But even so, I feel like killing Caroline would be a little too tragic even for Julie Plec & Co. So she'll be fine. She has to be. Right?