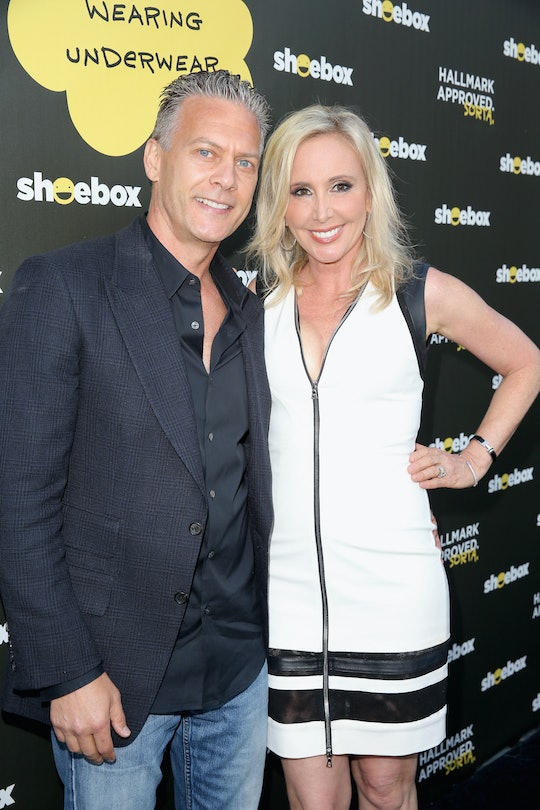 Don't Expect To See Shannon's Ex On 'RHOC' Next Season

Season 12 of The Real Housewives of Orange County has wrapped up, but people are already looking ahead to what the future has in store for the ladies in the upcoming season, especially considering that not one, but two divorces were announced after the finale by Kelly Dodd and Shannon Beador. This may lead some people to wonder if David Beador will return to RHOC. Season 13 will definitely be different, particularly for the Beador family, though it remains to be seen whether David will make an appearance or not.

The past two seasons of The Real Housewives of Orange County have shown a lot (and I mean a lot) of the problems within Shannon and David Beador's marriage. It started with a heartbreakingly honest look at David's infidelity in Season 11. Shannon opened all the way up about her heartbreak following the incident, the impact it had on the couple's three daughters, and how the two of them were working to repair the damage. By the end of the season it looked like David was ready to recommit to his marriage. The two renewed their vows and looked happier than ever in the footage of their second honeymoon. But sadly, their bliss was not meant to last. Season 12 saw David withdraw once again from his wife while Shannon tried to deal with this and the ongoing drama with her friends.

Shannon announced her split from David shortly before the series' reunion episode aired. In Part 1 of the reunion, Shannon explained how their marriage deteriorated and David finally decided to end things once and for all. "It’s not what I wanted and it’s been really, really hard," she said during the special. "We went on a trip to Hawaii, which I kind of hoped would bring everything together, but he left the trip early. And when I came home, he said, 'We’re done.'" It's been nothing short of gut-wrenching to watch the slow decline of the couple's relationship, but in the reunion Shannon said that they were trying to be amicable for the sake of their girls, and that she's ready to be a strong role model for them.

Amicable or not, I find it kind of hard to believe that David will be appearing on the show any longer after the divorce. Though he has appeared on the show for as long as Shannon has been a cast-member, now that they have split up, I imagine that Shannon's journey will focus more on her life as a newly single woman and learning how to raise her daughters without David in the house at all times. And frankly I would prefer it that way.

Since the couple has appeared on the show, I personally have been less than impressed with David. He always came across as a slightly indifferent husband, quick with a snide comment and slow with affection. He seemed particularly irritating in Season 12, and the sad reasons are now clear.

As to whether David will show up again on the show, precedent would suggest that he will not. After fellow OC cast-member Vicki Gunvalson divorced from her husband Donn Gunvalson, he stopped appearing on the show. It's little wonder, considering what Vicki said about her divorce in an interview with Digital Spy, stating, "I think the show had a lot to do with me getting divorced. I think it was too much pressure on a weak marriage."

Real Housewives of New York City star, Ramona Singer, divorced her husband Mario Singer, after which he did not appear anymore either. The ex-husbands of Real Housewives of Atlanta stars do occasionally make appearances, but they appear to be the exception rather than the rule. In any case, the implication is clear. Husbands may leave, but Real Housewives soldier on.