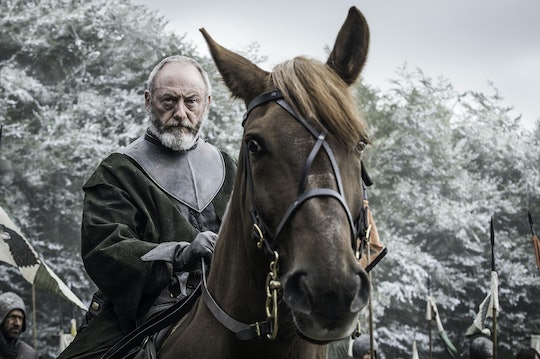 Will Davos Kill Melisandre On ‘Game Of Thrones’? The Pyre Left Some Things Behind

When Melisandre ordered a sacrifice of someone with king's blood last season on Game of Thrones, fans pretty much everywhere gave a collective tsk tsk of disapproval. But no one was sadder to learn of Shireen's death than her only friend, Davos. And now that he's found her little stag left over from the fire she was burned in, will Davos kill Melisandre on Game of Thrones? We can all agree that the red priestess has run her course and did her duty by bringing Jon Snow back to live and that's all well and good. But what do we even need her for at this point? Sure, she did that one good thing (however huge of a thing it was), but we really don't need her anymore. And Davos has every right to want to kill Melisandre.

More Like This
What Does Lilibet Mean? The Meaning Behind Meghan Markle & Prince Harry's Daughter's Name
Gabrielle Union & Zaya Wade Just Channeled '10 Things I Hate About You' In This Video
Bindi Irwin Has Been Sharing The Cutest Photos Of Her Daughter
14 Great TV Episodes To Watch With Dad On Father’s Day

The last Davos even heard of Shireen's fate was a non-response from Melisandre and then Brienne, about Stannis's army falling to Ramsay's, insinuating that pretty much everyone on Stannis the Mannis's side had perished. What Davos never learned was what had happened to his friend and surrogate daughter, Shireen. If we remember clearly — and has anyone really forgotten? — Melisandre claimed that the gods demanded a sacrifice in order for the snow to stop falling and the cold temperatures to drop, which were both factors in weakening Stannis's army.

One of the images of Sunday's episode of Game of Thrones that will likely stick with you was that of Davos standing at the pyre where Shireen had been burned alive, looking through the remains as the sun rose behind him. And what he found was Shireen's tiny carved stag that he'd given her himself. Are you crying yet? Go ahead — let it all out.

Since Davos lives through the Battle of the Bastards, and can put two and two together regarding Shireen's carved stag left behind in the pyre and the fact they Melisandre is an all around not nice person, then she's definitely on his list. It's likely a very short list, mind you, since Ser Davos isn't an awful human being as far as good and evil goes on Game of Thrones, but he has every reason to do her in.

If it isn't enough that in the final minutes of Sunday's episode of Game of Thrones we see Davos gave Melisandre a knowing look that will likely play out in the Season 6 finale, then consider the fact that Davos never really wanted her around in the first place. He'd always seemed to warn Stannis of her motives and general mystery, and that wasn't a good thing. Davos may have like just learned to read, thanks to the late Princess Shireen (remember how he used to call her that? Okay, no more crying today), but he's no idiot.

If you are asking yourself, "Will Davos kill Melisandre?" then we all have to assume that the answer is yes. Season 6 of Game of Thrones has had a lot of revenge play out and it's only fair that Davos get his cut, right?