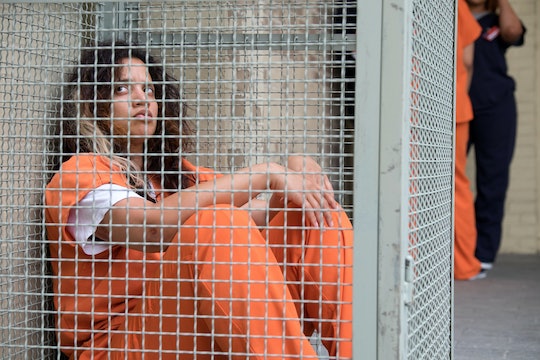 Fans Are Worried About Daya In Season 6 Of 'OITNB'

Orange Is The New Black is gearing up for its sixth season and the show's fanbase remains eager as ever for a new installment to drop. Last season, easily the show's best crafted, unfolded over the course of just three days as the inmates of Litchfield staged a prison riot in which several people died. Responsible for one of those deaths is Daya Diaz, which leaves fans wondering: will Daya be in Season 6 of OITNB? At the end of Season 5, we see her in custody after she turns herself in for shooting a guard. We already know that Season 6 focuses on the inmates' relocation to a maximum security facility, but will Daya go with them? The actress behind the character, Dasha Polanco, didn't know what to expect herself.

"Daya’s on her own; she just committed a crime (and) obviously that will be punished," Polanco told USA Today last summer after Season 5 ended. "You might not see her ever again." But she does show up in several production stills released from Season 6, albeit looking very ratty in a cage the size of a telephone booth, so we know we'll at least catch a glimpse of her. According to iMDB, Polanco is only credited in the first episode of Season 6, but that might just be an effort to divert spoilers.

In other production stills, she can be seen out in the yard with the other inmates, and even staring down the two rival cell block leaders over a table in the cafeteria. So it's possible that we'll only see Daya in a few episodes, but she appears to have a handful of scenes, which could suggest a meaty storyline this season.

Many fans worried about what would happen to Daya and Gloria once the two were separated. Gloria often steps in as a mother figure to Daya, however imperfect, and their relationship is cherished by fans. While photos from the season do show them reunited at the same facility (unlike poor Flaca and Maritza), the trailer gives us a big clue about what might go down between them. In it, Piper explains to Suzanne that the colors of their uniforms hold a lot of significance. "Blues and khaki's have beef with each other," she reassures a carnation-pink-clad Suzanne. "Pinks are safe out there." But you know who is in warring blue and khaki uniforms? You guessed it: Gloria and Daya.

It seems like an alliance between the two might be impossible, if they're stuck in feuding cell blocks. Daya also runs away from her mom when she comes to visit the facility, but a quick snippet of the trailer also shows her tenderly clasping hands with a new inmate, so maybe Daya finds some new friends this season. (It looked more than friendly, if I'm being completely honest, but it's always hard to gauge the boundaries of female intimacy on this show.) Whatever ends up happening to Daya, we'll all find out together when Season 6 of Orange Is the New Black drops on July 27.