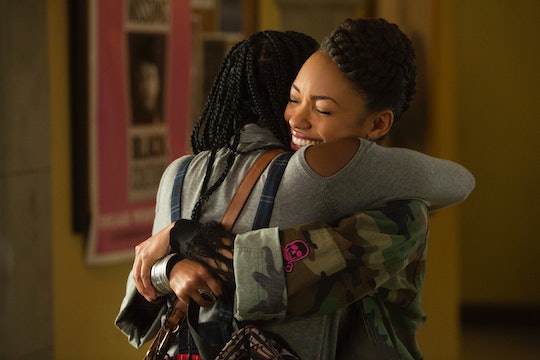 Netflix has a new original series that begins streaming on April 28 and it's already ruffled a few feathers. Dear White People, which is continuation of Justin Simien's 2014 film of the same name, is set at a predominantly white Ivy League university where racial tensions are running high. As with most Netflix shows, the entire first season will be available immediately, so it's not surprising that people are already wondering if Dear White People will return for Season 2. Unfortunately, it's too early to know for sure, but based on the success of Netflix's other original series, it'd be surprising if the show didn't end up getting renewed.

If you haven't seen the film, you should definitely check it out before you watch the show because it will contain the same characters from the movie as well as a mix of actors reprising their former roles along with newcomers replacing previous actors. However, you don't have to watch the movie in order to enjoy the show, as there seems to be a bit of overlap between the two projects.

The show will continue to follow Sam White who's still hosting her radio show in which she discusses race, except now she's secretly hooking up with Gabe, who is white. It'll also continue to follow Coco Conners, who's best know for her weaves in the film; Troy Fairbanks, the son of the dean; and Lionel Higgins, who's dealing with his sexuality and race.

In the film, Troy ran for president and Sam decided to run against him. In the show, Troy is still running for president and Sam is still very much against it, though it's unclear if she chooses to challenge him. The show is also said to be more complex than the film, which makes sense considering the writers have way more time to really go in depth with each character.

Unsurprisingly, the new series, just like the film, has already stirred up some controversy. The title of the show, which is also the title of Sam's radio show, upset white people and reportedly also black audiences who felt the show's title should've been directed more towards them. Despite the backlash, the series has already received a lot of critical acclaim and is being seen as the perfect show for Trump's America.

It definitely looks like Netflix has another hit on it's hands and hopefully fans will get to see it continue on in the future.