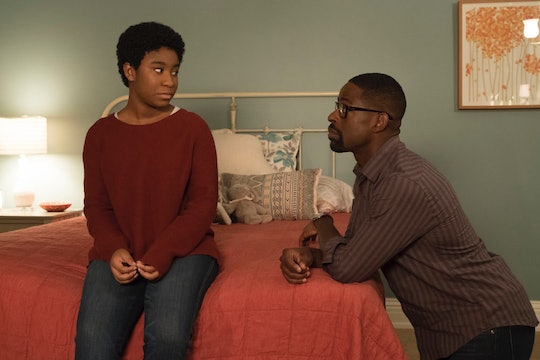 When Randall and Beth went to check on Deja at the end of "Vegas, Baby" on This Is Us, they discovered that her situation was worse than they expected. Deja and her mother Shauna were living in their car, having been unable to afford their rent. In this week's episode, they went to stay with the Pearsons for the night until Shauna decided she had to leave. But will Deja stay with Randall and Beth on This Is Us if her mom isn't there too?

At this point, it seems like a done deal that Deja will be moving back into the Pearsons' house, though it definitely isn't confirmed. This show does love a twist or two, but it did too much work setting up Deja's return to just dismiss it and send her off with her mom again. The past few episodes have emphasized how emotionally connected both Randall and Beth still feel to Deja, and "This Big, Amazing, Beautiful Life" illustrated just how much she needed them, too.

The episode took viewers through Deja's life, quite literally from the start. It began with her birth, introducing the audience to her loving great-grandmother and depicting the difficulties Shauna dealt with as a teen mom who might not have been ready for the responsibilities dropped in her lap. After Deja's great-grandmother passed away, things only got harder.

Shauna struggled to support Deja both financially and emotionally, often relying on her too much to take care of things. Deja clearly had to be independent from a very young age, which created a strain that sometimes pushed things to the breaking point. Deja injured herself making dinner one night and had to go to the emergency room alone, which was the first time she was removed from her mom's care by Child Protective Services. Several other foster homes followed until she found her way to Randall and Beth, and a home that was distinctly different from the others.

In her first foster home, Deja had made a friend named Raven. They were very close, but they were separated after they were moved to different places because their foster father was violent. Before they parted ways, Raven made Deja promise that if she found her way into a good situation, she would hold onto it. That must have been on Deja's mind with Randall and Beth. Though she probably would never openly pick them over her mother, she was happy living with them.

That was something Shauna noticed, too. When she saw how relaxed Deja could be with the Pearsons, she realized just how much stress Deja had been dealing with. Even though Shauna wanted to be with her daughter, she also knew that at the current moment she couldn't give Deja what she really needed. It seems likely that she will encourage Deja to stay with Randall and Beth, and now that it's her choice it might be somewhat more permanent than last time.

Throughout "This Big, Amazing, Beautiful Life," This Is Us made it clear that Deja was a part of the Pearson family no matter what. Though no character said that in so many words, the episode intercut scenes from Deja's life with key moments in the lives of the various Pearsons that mirrored what was happening to her. The way it was edited fit Deja into the fabric of the family, calling to mind Kevin's speech way back in "The Game Plan." Deja is now officially part of the "us" of the title.

Shauna probably won't stay out of Deja's life forever, especially since Randall and Beth are more than open to staying in contact with her. But right now Deja needs something different, so it doesn't look like she'll be going anywhere any time soon.