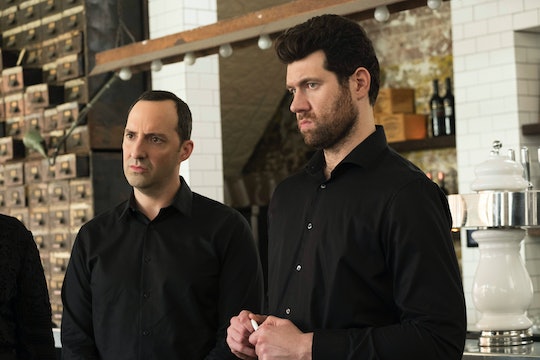 The third season of Difficult People is coming to end and many fans are already wondering what's next for the comedy. Will Difficult People return for Season 4 or is this the end of the road for Julie and Billy? Unfortunately, the show hasn't been renewed or cancelled yet, so its fate is still up in the air.

This past season has been arguably the best season of the series thus far. Over the course of the 10-episode installment, there's been a ton of incredible guest stars, including Larry Wilmore, Vanessa Williams, John Cho, and Lucy Liu. Cho and Liu will return for the season finale as well as Tony Hale, Andy Cohen, and the show's executive producer Amy Poehler.

This is the first time Poehler will appear on the show and she'll play Flute, a hippie who meets Billy and Julie at a trendy L.A. restaurant. It looks like she may help Billy adapt to his new surroundings, now that he's moving to the West Coast. Meanwhile, back in New York, Marilyn will be moving forward with her memoir and some major changes are set to happen at the café, including the hiring of a brand new waiter. It definitely seems like change is in the air on Difficult People.

Besides the incredible guest stars, fans have really appreciated the way Difficult People has handled the current political climate on the show. While Julie and Billy are still the same self-involved people they've always been, they've also somehow become more likeable because of their response to President Trump.

Similarly, the show broached the topic of healthcare when Billy and Julie attended a protest in which it was revealed the city's health care providers merged with chain restaurants after Trump replaced the Department of Health with Jenny McCarthy's blog. The pair then went to Quiznos Clinics where you can use "Toasty Points" for your doctor appointments. In this way, the show successfully took some Americans' very real fears and concerns, and somehow turned it into something viewers could laugh about.

Additionally, Decider argues the show's handling of "Trump America" is even cathartic. For instance, in one episode, Julie and Billy happily wave at people on a comedy bus tour around Manhattan while quietly judging and cursing them, presuming they're Trump supporters. While this isn't something regular people should do in polite society, Julie and Billy get to say the things a lot of people may be thinking right now, making the show a bit more fun.

If the show is renewed, it'd be great to see how the show continues to handle political commentary and more importantly what's next for Julie and Billy. Unlike other shows where you typically see characters grow and mature, Julie and Billy are still a hot mess, and while their professional goals change, their way of handling themselves has not. Will these two ever stop being difficult? Probably not until the series comes to an end, but hopefully that won't happen any time soon. The show is at it's best when Julie and Billy are at their worst.