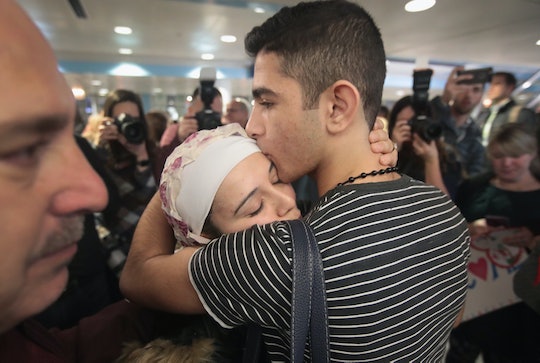 Next U.S. Entry Requirement May Be Social Media

As the current administration continues pushing forward with its executive orders and fiery rhetoric, many of America's most time-honored morals are currently in its sights, with President Donald Trump's travel ban proving to be one of the most highly controversial. While the ban has been widely contested and federal judges are actually considering its constitutional standing, the Trump administration remains adamant on the issue of immigration, especially implementing strong vetting practices, with Republicans claiming America's safety is at risk. And now, according to a report by NBC News, handing over social media passwords could be a requirement for entering the United States.

After Trump's recent executive order was signed, and hundreds of immigrants were held up at airports all over the country, much of America took to social media to air their grievances, and to the streets (and airport terminals) to protest. As xenophobia and racism are seemingly becoming common place in today's political climate, this new law wouldn't necessarily be surprising, but would still be an insult to this nation's founding morals.

A reported new piece of legislation would require United States visa applicants to allow officials access to their social media accounts in order to "see what they do on the internet," according to Homeland Security Chief John Kelly.

The Trump administration has repeatedly claimed that the vetting process for immigrants wishing to enter the United States wasn't thorough enough. In fact, on the campaign trail, Trump said:

It's easy enough to say whatever you want to say on a questionnaire. Then the question becomes how much time and how intensely is someone going to be scrutinized — what is that going to do to the overall immigration system in the United States?

However, many have fired back at Trump, claiming that the current vetting process for immigrants is already rigorous enough, with one woman coming forward to explain, "we were thoroughly vetted before we came here, just like other refugees — exhaustively, endlessly vetted"

The proposed social media password requirement isn't entirely soundproof, though. As many have pointed out, the requirement would very likely be open to interpretation by officials, meaning that one simple post by a visa-seeker, thanking Allah, or quoting the Quran, could mean the person isn't allowed entry into the United States. While it is still in the early stages of planning, it would need a lot of work to be able to actually do its job and not infringe on universal rights.

While the new regulations aren't set in stone, and haven't even been implemented as of yet, Republican lawmakers are still considering them, and it wouldn't be out of character for Trump to want to sign them into order, effective immediately. Nevertheless, the new proposal takes "extreme vetting" to a whole new level — what consequences they might have if signed into law.