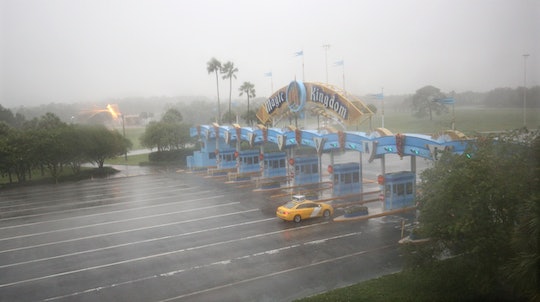 Those who don't live in hurricane-prone areas may not be used to planning for one, but if you were planning a visit to Florida soon, it's time to prepare. Will Disney World close for Hurricane Irma? And if so, what will that mean for guests? Of course, it's not as big of a deal as having your house destroyed, but a canceled vacation could mean that you're out thousands of dollars, which is kind of a big deal. According to the resort's website, Disney vacation packages and most room reservations can be canceled or rescheduled without a fee if the National Hurricane Center issues a hurricane warning for Orlando within a week of a guest's scheduled arrival date. As of Wednesday afternoon, no warning or advisory had been issued for the area.

The trouble is that Irma is harder to track than other storms, according to CNBC, because a hurricane's path and intensity is governed by the atmosphere it passes through, and right now, the wind and moisture in the area are kind of all over the place. A low-pressure system currently moving across the United States could push it towards Florida, but that system could get disrupted by mountains or destroyed by vertical wind shear before that happens. Unfortunately, the only way to know exactly where it's going is to wait and see.

Disney World is prepared if the storm takes a turn, and has a dedicated Hurricane Irma page to assure guests that the resort is currently fully operational and monitoring the weather. While a few news outlets across the country (and the globe) have been featuring some anxiety-inducing headlines, the Orlando Sentinel and Florida Today remain the voices of reason, reminding visitors that Florida knows a thing or two about hurricanes, and there's no reason to freak out just yet. When there is, you'll know.

Disney World is a well-oiled machine, and it's seen its fair share of bad weather. The park has only closed for hurricanes four times, according to CNBC, most recently for Hurricane Matthew in 2016. After closing for a day and a half as a precautionary measure, the park reopened just in time for a weekend with no damage. Those who plan to be in the area should familiarize themselves with basic hurricane preparedness, especially if this is their first (see Ready.gov for tips), but rest assured that the world's busiest theme park, which just so happens to be situated in hurricane country, will have everything under control.