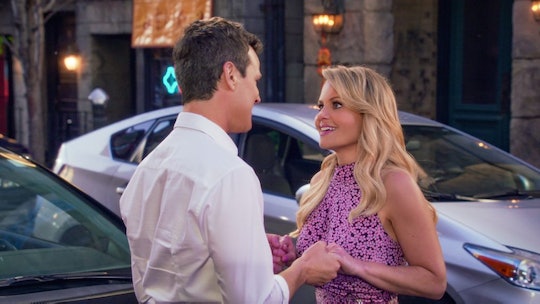 Season 4 of the Full House reboot, Fuller House, is set to premiere on Netflix on Dec. 14 and everyone who watched the original in the '90s is doing a collective happy dance. At least, I am. This season, fans can expect to see more focus on Stephanie, a lot more of the lovable adults (hi, John Stamos), and probably the phrase "how rude" for old time's sake. With all of this awesomeness, you're probably dying to know, will D.J. and Steve finally get together in Fuller House Season 4?

It looks like yes — high school sweethearts, D.J. Tanner (Candace Cameron Bure) and Steve (Scott Weinger), will take the leap into full-blown relationship status. It's only been 25 years since those first butterflies, but who's counting? Me. I am. The pair have been teasing whether a relationship could happen for literal decades. Lucky for you, Bure recently confirmed D.J. and Steve will be a sure thing in Season 4, telling E! News, "D.J. and Steve are together. There's no back and forth in Season 4, so she's with Steve and made that decision."

You can all breathe now. After all the will-they-won't-they for three seasons (plus through the '90s), it's good to finally see this thing happen. At the end of Season 3, the lovebirds decided to date again. Season 4 is meant to explore that relationship. Though Bure also said their love story won't take center stage. In the first episode of Season 4, "Oh My Santa," the scene is set for the holidays. Perhaps some mistletoe will creep in? In the trailer, Steve professes his undying love for D.J. and the two embark on a musical number as a nod to the hit film, La La Land.

As you can see from the heartwarming montage, Season 4 has a lot going on. Whether it's Stephanie taking the title of "Wombzilla," or Uncle Jesse and Aunt Becky maintaining #relationshipgoals status, it's a season you won't want to miss. As far as D.J. and Steve, the video promises to bring all the romance. "We've been waiting 25 years, we owe it to ourselves once and for all to just see how we are as a couple," Steve says in the promo before the big dance number. Bure commented on the sequence, humbly saying she did "OK" during stint on Dancing With the Stars, but that dancing with Weinger was her favorite episode to film. I think dancing on set with my fictional, longtime sweetie would be my favorite episode to film as well.

As far as the fandom — calling all loyal shippers — the wait is almost over to finally see these two get together. You might wonder if your expectations are too high but I'm here to tell you they're not high enough. Bure also commented on the sentiment in the same interview with E! News adding, "I like watching and I hope the fans enjoy actually watching that relationship develop more." If that's not a hint as to how well things will go, then I don't know what else to tell ya.

You can watch Fuller House for many reasons (hi again, John Stamos), but at the core, you're still wondering is Steve and D.J. will make it worth your while. In the infamous words of Michelle Tanner (Mary-Kate and Ashley Olsen), "you got it, dude."