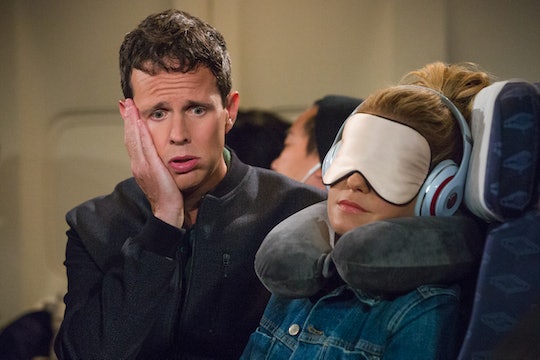 Warning: Season 3 spoilers ahead! Poor Steve. Just when it looks like he's finally able to move on from his high school sweetheart D.J., he accidentally discovers that she's still in love with him and was going to choose him before she realized he'd met someone else. D.J. thought she was confessing all of this to Kimmy on the airplane to Japan for Steve's wedding (she was wearing a sleep mask at the time), but it was really Steve sitting next to her. So what now? Will D.J. and Steve get back together on Fuller House or will the wedding still go on? Unfortunately, it appears as though fans are going to have to wait for an answer to that question.

Since Season 3 of Fuller House is a total of 18 episodes (significantly longer than the previous two seasons, which only had 13 episodes a piece), it was decided that the season be split into two parts with Part 1 airing its nine episodes on the 30th anniversary of the original series, and Part 2 airing its nine episodes at a later date. However, we have no idea when that later date will be. (I'm predicting sometime in December, but that's just a guess on my part.)

So naturally, Steve learning about D.J.'s feelings for him was used as a cliffhanger at the end of Episode 9, meaning we have absolutely no idea what he's going to do with this newfound information.

D.J. and Steve clearly still have feelings for each other. When they both got sent that photo of the two of them dressed up in a tux and wedding gown, they stared off longingly, as if they wished this was how it was in real life. But that doesn't mean it's a guarantee that Steve will call off the wedding to C.J. He obviously loves this woman, otherwise he wouldn't be marrying her to begin with. But does he love her as much as he loves D.J.? That's a question only he can answer.

Plus, it could be a case that he just doesn't trust that D.J. won't change her mind later on. She's hurt him once before, so who's to say she wouldn't do it again? Her feelings for Matt are also something to factor in as well. They've now officially said "I love you" to each other and she's clearly thought about marrying him. (It's why she initially tried on that wedding dress in the first place.) So what do you do when two people like each other, yet also like other people? It's a confusing situation to be in, which is why I very much doubt it will end up being solved immediately, whenever Part 2 picks up again.

D.J. isn't even aware that Steve heard everything she just said. He will let her know and confront her about it or will he sneak off and think about what he should do next? I'm guessing the latter, but either way it's bound to make the rest of his plane ride way more stressful. Not all fans are #TeamSteve, but you can't deny that they had an epic love in the original series. Whether or not that's meant to continue on into their adult lives is yet to be seen. (Your high school love isn't always your forever love.) But maybe these two really are meant to be. Regardless, I'm very interested to see how this will all play out.