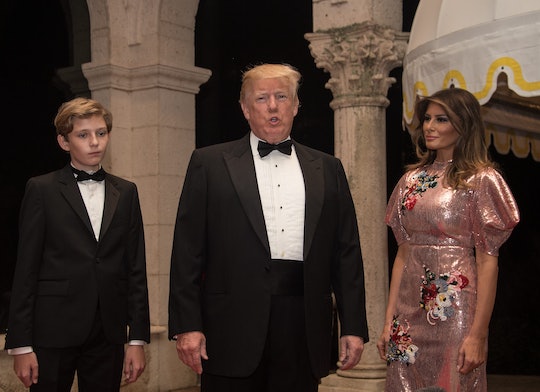 As They've Done For Years, The Trumps Will Celebrate New Year's Eve In Palm Beach

A new decade is around the corner and President Donald Trump and Melania are expected celebrate New Year's Eve together in Florida, just as they have done many times before. Last year, however, the POTUS and FLOTUS weren't in each other's company when the clock struck midnight amid a government shutdown, but it seems they're set to ring in 2020 together at Trump's home away from home — Mar-a-Lago.

Trump will be ringing in the new year at Mar-a-Lago, his golf resort in Palm Beach, Florida, according to WPTV, which is where he's spent New Year's Eve for years before moving into the White House. On Dec. 12, Trump took to Twitter to announce he'd be there for an extended stay over the holidays. "I will be there in two weeks, The Southern White House!" he tweeted earlier this month, alongside a link to Mar-a-Lago's website.

The Federal Aviation Administration (FAA) has also issued a notice about flight restrictions for West Palm Beach, indicating Trump will be there until early January. So barring any unforeseen issues that arise, it looks like that's where Donald, Melania, and presumably Barron Trump will be spending their extended winter break from the White House.

Last year's New Year's Eve celebrations were a bit different; while the first lady was there at the resort in 2018, The Palm Beach Post reported, Trump remained in Washington, D.C. in light of an ongoing government shutdown that lasted from Dec. 22 through Jan. 25.

In 2017, however, Melania did spend New Year's Eve with her husband at Mar-a-Lago, according to The Palm Beach Post. The Trumps attended Christmas Eve mass that year at The Church of Bethesda-By-The Sea in Palm Beach, the same church at which they were married.

Considering Donald and Melania Trump were photographed making their way to a service at Family Church on Christmas Eve, it's clear they're both already in Palm Beach. So chances are, Donald, Melania, and Barron will still be there, attending a ritzy and lavish dinner party at their resort with men in tuxes and women in fancy dresses, when the clock strikes midnight and 2020 officially begins.