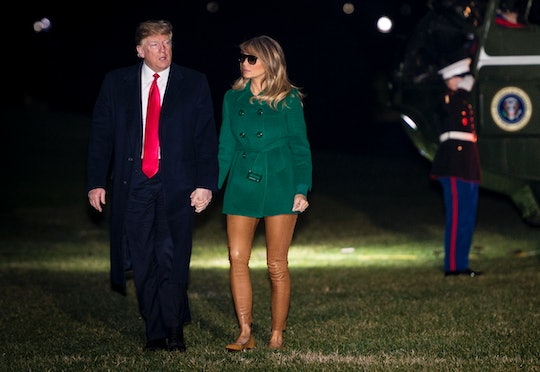 A new year marks a new beginning — a new opportunity to shape your life over the course of the next 12 months for the better. This is why New Year's Eve is so important to some people— the people you surround yourself with to ring in the year is symbolic. If anyone has a lot to do over the course of the next 12 months, it's President Trump. And even the president celebrates New Years Eve. So, of course people are wondering — will Donald and Melania Trump celebrate New Year's Eve together?

The end of Trump's year hasn't necessarily been the most ideal. The government entered a partial shutdown two weeks ago over debates about border wall funding between the United States and Mexico, according to Washington Post. Since then, Trump has made some personal decisions relating to how he has spending the past two weeks. Instead of choosing to spend Christmas and the rest of the holidays at his Mar-a-Lago resort in Palm Beach, Florida (where he was going to spend 16 days in), according to Deadline, Trump spent Christmas at the White House in Washington D.C.. Melania had been in Mar-a-lago "as planned," but ended up joining her husband in the nation's capital to spend Christmas Eve and Christmas day together, according to Deadline.

But it seems as if the couple will be spending New Year's Eve apart. Mick Mulvaney, Trump's acting Chief-of-Staff, reportedly confirmed to Fox & Friends on Sunday that Trump would be staying put in the nation's capital for the countdown to midnight, according to the New York Post

A representative for the White House did not respond to Romper's request for comment about their New Year's Eve plans at this time.

But Melania reportedly hasn't cancelled her plans. A source told Hollywood Life over the weekend that Melania will reportedly attend the annual New Year's Eve gala at Mar-a-Lago on Monday without her husband. The bash is super opulent, according to Rolling Stone — tickets to the party cost $1,000 a piece, which is a pretty price to pay to party with the president (or at least, party with his family members). And even Trump's children could be in attendance. Trump's daughter, Ivanka; her husband, Jared Kushner; and their kids are also in Mar-a-Lago for the holidays, according to USA Today.

Melania has reportedly been in Florida since Thursday, according to the New York Post. And although she has been there for a few days, she could easily change her plans at the last minute to be with her husband to ring in the new year — just like she did for Christmas.

Until this happens, no one will know for sure what the Trumps will be doing on New Years Eve. But, in the past, he has rang in the New Year with his wife. In 2017, the couple attended the gala at Mar-a-Lago, as they had in years past, with Melania wearing a light pink dress, according to InStyle. In 2016 (the year Trump got elected president) the couple celebrated the new year in Florida, again, according to Vogue — and they had a lot to celebrate that year.

But it's unclear if Trump will be upset that he is reportedly missing out on this tradition of ringing in the new year in Florida. It's just as uncertain if Trump is a "spend all night on the dance floor with a bottle of champagne" party animal of New Years Eve or a "drink one glass of wine and be in bed by 12:05 a.m." kind of guy.

But he is the kind of guy to send an uplifting New Year's message with his friends and family. On New Year's Eve last year, Trump shared an incredible message for everyone on Twitter.

"As our country rapidly grows stronger and smarter, I want to wish all of my friends, supporters, enemies, haters, and even the very dishonest Fake News Media, a happy and healthy New Year," Trump wrote. "2018 will be a great year for America!"

No matter where Trump ends up spending his New Year's Eve, one can only hope that he shares another sarcastic and inspiring New Year's message.