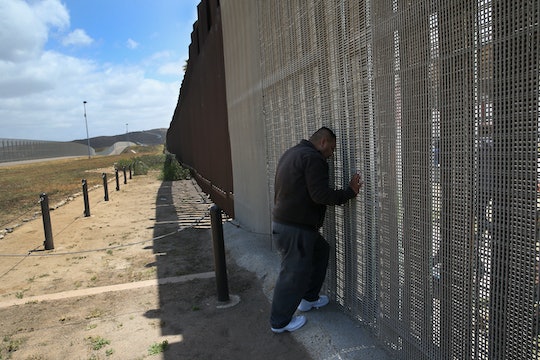 Will Donald Trump Actually Be Able To Build A Border Wall? It's Not Clear Who Will Pay

Immigration has been a heated issue throughout this year’s presidential election and one of the most controversial and extravagant plans has come from Donald Trump, who has vowed to build to a big and beautiful wall along the border of the United States and Mexico. The big idea has garnered plenty of pushback and criticism from both American and international political figures as well as voters for being too fantastical. But, realistically, will Trump be able to build a border wall? If the Republican candidate wins the presidency this November, whether or not the the expensive plan will actually come to fruition will most likely depend on who — the United States or Mexico — will foot the hefty bill.

Trump flew to Mexico this week to meet with President Enrique Peña Nieto to discuss the proposed border wall and, depending on who you ask, the country that will pay for it varies. According to CNN, Trump said the topic of payment wasn’t discussed, but Peña Nieto "made it clear" that Mexico wouldn’t be responsible.

But, on Wednesday Peña Nieto tweeted a different side to the story. He wrote in Spanish, "At the start of the conversation with Donald Trump, I made it clear that Mexico will not pay for the wall."

Trump said that one day he will build an "impenetrable, physical, tall, powerful, beautiful, southern border" wall, not a fence, between the neighboring countries. About 650 miles of the roughly 1,900-mile U.S.-Mexico border are already covered by a series of fences, but Trump has been clear that a concrete wall will be much more powerful than the current fencing in place and to change that will come at a steep price.

So, how much is this wall going to cost? Trump has claimed that it will cost somewhere between $10 billion to $12 billion. But, a study by The Washington Post estimated the cost of the wall would be much higher and closer to $15 billion to $25 billion.

Trump has repeatedly asserted that Mexico will pay for the wall, but Peña Nieto has previously said Mexico will not pay for the expensive plan proposed by the Republican candidate, who has called illegal immigrants from the country "drug dealers, rapists, and criminals."

But, again on Thursday, Trump tweeted that Mexico will be responsible for the bill:

Still, according to Reuters, Mexico firmly stated that it will not pay for it and finds the plan "outrageous." In an interview with a local radio station, Mexican presidential spokesman Eduardo Sanchez said that "the proposal to build the wall, and to believe that Mexico could and would pay for it, is outrageous" and that "Mexico will not pay a single cent if they want to build a wall on that side of the border."

It's clear that there is a very big disconnect on the issue of payment, but there are still many other important factors that would need to be considered before an enormous construction project begins, such as international relations as well as the impact it would have on the environment and its wildlife.

Plenty still needs to be taken into account and decided before a massive concrete wall is built and until Trump's plans for it become more concrete, it continues remain unclear how realistic the wall actually is.