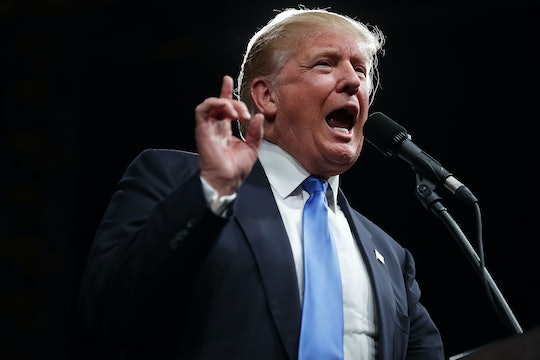 Will Donald Trump Concede The Election If He Loses? At This Point, We Still Don't Know

There's just four days left to go until Election Day, and the race for the White House seems to tighten with each new poll. According to The Washington Post, gone are Democrat Hillary Clinton's decisive leads in various national surveys and key battleground states; Republican Donald Trump is gaining ground on his rival in places like Maine's second congressional district, New Hampshire, and Utah, where third-party candidate Evan McMullin was considered to have a decent shot at winning the state just last week. No one knows exactly how the Electoral College will shake out next Tuesday, but one question has remained somewhat unanswered ever since last month's final presidential debate: Will Donald Trump concede the election if he loses? Though Trump campaign spokesperson Jason Miller said his boss would indeed acknowledge a Clinton win, his Oct. 19 comments to CNN's Jake Tapper came with a caveat of sorts:

Short of rampant, widespread voter fraud, of course, if the other candidate wins, we'll uphold that. I mean, that's — that's very clear. But again, our goal leading up to then is to make sure that we have ballot box integrity, voter integrity, and I think that's common sense.

Miller's interview, however, preceded Trump's own response to moderator Chris Wallace at that evening's debate, according to Vox. When Wallace asked him if he would "absolutely accept the result of this election," Trump replied:

Trump has repeatedly hinted at the possibility of the election being "rigged" against him, citing media bias, the FBI's "refusal" to levy charges in the Clinton email scandal (despite months of investigation and Clinton undergoing hours of questioning), and unproven allegations of voter fraud to bolster his claims. Despite his unprecedented comments at the presidential debate — during which Wallace cautioned Trump was close to defying a long-standing American principle supporting a peaceful transition of power following the outcome of a presidential election — Trump made light of his remarks at an Ohio campaign rally the following day, according to CNN:

Ladies and gentlemen, I would like to make a major announcement today. I would like to promise and pledge to all of my voters and supporters and to all of the people of the United States that I will totally accept the results of this great and historic presidential election — if I win. ... America is a constitutional republic, with a system of laws. These laws are triggered in the case of fraud. Or in the event of a recount where it’s needed. Of course I would accept a clear election result. But I would also reserve my right to contest or file a legal challenge in the case of a questionable result.

Should Trump fail to win the presidency come Election Day, whether or not he concedes to his opponent is likely a moot point, says Rick Hasen, a University of California-Irvine professor who runs the Election Law Blog. Hasen told CNN it has no "independent legal effect" on the election results: "If he concedes or he doesn't concede, the vote totals will be what they will be." However, Hasen did forewarn of the other potential effects of Trump failing to admit defeat:

At the extreme, his claims could encourage his supporters to take to the streets, perhaps to even to engage in violence. More likely though it will become a rallying cry to try to delegitimize the Clinton presidency before it even begins. And to make it harder for her to pursue her agenda.