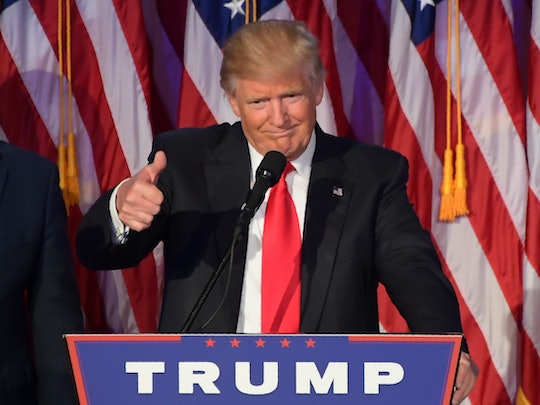 President-elect Donald Trump has made a lot of promises about taxes: during his campaign, he vowed to cut taxes "across the board," increase the standard deduction, and eliminate estate and alternative minimum taxes. We know that a large chunk of Trump's tax plan (including eliminating the surtax on investment income and lowering corporate taxes) benefit both corporations and the wealthy. But how does Trump's tax plan affect those most vulnerable to these changes? Will Trump's tax plan hurt low-income families?

More Like This
Everything You Need To Know About The Proud Family Reboot Coming To Disney+
Bindi Irwin Has Been Sharing The Cutest Photos Of Her Daughter
Wait, Did The Government Actually Do Something For Parents?
15 Of JAY-Z’s Best Quotes On Parenting

That depends who you ask. According to Trump, things would improve for everyone, and as he said in a Florida rally, "We are going to massively cut taxes for the middle class… who I call the forgotten people." According to the Tax Policy Center, however, that's not true: Trump's tax plan would save most Americans money, but it would hit those who need tax savings the hardest. As the center's election calculator explains,

Single parents and large families with low or moderate income would likely pay more tax ... because the plan would eliminate head-of-household filing status and all personal and dependent exemptions.

Trump would condense the current seven tax brackets into just three, meaning low-income families earning less than $30,000 a year would go from paying 10 percent of their wages in taxes to paying 12 percent. Trump's plan would also eliminate the "head of household" filing (which gives tax breaks to those paying over half of household costs and single people caring for dependents), as well as personal and dependent exemptions (currently worth $4,050 per dependent).

Trump does have plans that are meant to replace those cuts: he wants to increase the standard deduction per person and has plans to offer parents childcare tax breaks. However, according to CNN, many low-income families likely benefit more from their head-of-household status and personal deductions than they would under Trump's changes.

A new report by law professor and Tax Policy Center fellow Lily Batchelder actually estimated that, under Trump's plan, 8.7 million families could see tax increases. "About 20 percent of households and more than half of single parents would pay more in taxes," Batchelder wrote in October. "Roughly 26 million individuals reside in these families facing a tax increase, including 11 million adults and 15 million children." (Stephen Miller, the Trump campaign's national policy director, told CNN that Batchelder's report was "entirely fraudulent" and did not consider all aspects of Trump's plan, although Batchelder was able to explain why she left out one $500 benefit, and how its inclusion wouldn't affect her results.)

Regardless of whether Trump's tax plan affects Batchelder's estimated 8.7 million families or not, one thing is certain: The majority of the tax breaks from Trump's plan won't benefit low-income families. Instead, according to the Tax Policy Center, 47 percent of tax savings will go to the United States' wealthiest 1 percent. To see how much your family would be charged under Trump's tax plan, check out the Tax Policy Center's election calculator.