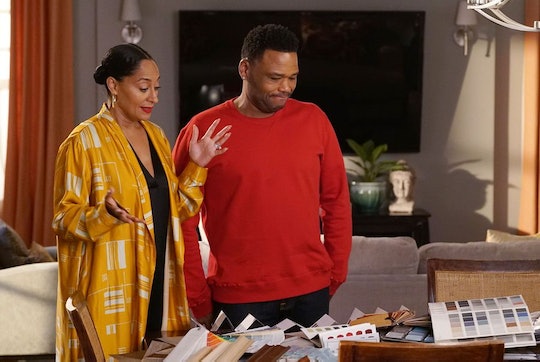 Dre & Bow's Marriage Could Be In Jeopardy On ‘black-ish’

Many people watch black-ish for the laughs, which makes sense considering it's a comedy series. But the show has also hit a lot of serious topics over its four seasons. From police brutality to the popular "Juneteenth" musical episode, the show has rarely shied away from tackling the tough stuff. That's been proven quite recently as Dre and Bow are currently facing marital problems. And while fans don't want to believe it, they can't help but ask: will Dre and Bow get divorced on black-ish?

Unsurprisingly, the cast and crew are staying tight lipped on the subject and refuse to give anything away about what's in store for Dre and Bow, but things certainly aren't looking good. In Episode 20, which was aptly titled "Fifty-Three Percent" to reflect the percentage of marriages that end in divorce, Dre and Bow's marital problems began. At the top of the episode, Dre noted that every few years he and Bow get into a "funk," but typically the problem resolves itself. This time it hasn't.

During the episode, the pair got into fights about basically everything when they were supposed to be celebrating Devonte's first birthday. Although they went to marriage counseling and had a date to try to spice things back up, nothing seemed to work. And even though fans were hoping for a different outcome, it was clear by the end of the episode that things between them still weren't resolved and it doesn't look like things will get much better in the upcoming episode either.

Dre and Bow are still at odds and based on the preview it looks like the rest of the family has caught wind of the situation now as well. The promo even has some fans worrying that Dre is moving out and perhaps he and Bow have decided to separate, which would be absolutely devastating, especially for the family. During an Emmy For Your Consideration event for black-ish, Marsai Martin, who plays Diane, talked a little bit about what this will do to her character.

"A lot of kids can relate to this," she told IndieWire, adding:

Divorce is pretty tough title, or separating. With Diane being her tough self you wouldn't think she'd be scared, but being a kid she's sensitive to that topic. This is a pretty tough episode.

If even someone as strong as Diane will be affected by what's going on, then you know Dre and Bow's issues are very real, and one has to wonder if they can truly get through this or if it will signify the end of the road for their marriage.

In my opinion, I think it's a little too early to believe all hope is lost, especially because Dre and Bow have been through so much together. Things may be bad now, but that doesn't mean we should give up. Even though it may take some time and definitely more marriage counseling, Dre and Bow could definitely get through this. Sure, they have their differences and their views don't always align, but their love for one another is very much real. Shouldn't that be enough? Fans certainly hope so.

Unfortunately, you won't know for sure what's next for Dre and Bow until the next episode airs. And even then the issue still may not be fully resolved, though surely the show won't extend our heartbreak any further, will it? You'll just have to keep watching to find out and hope that everything works out in the end.