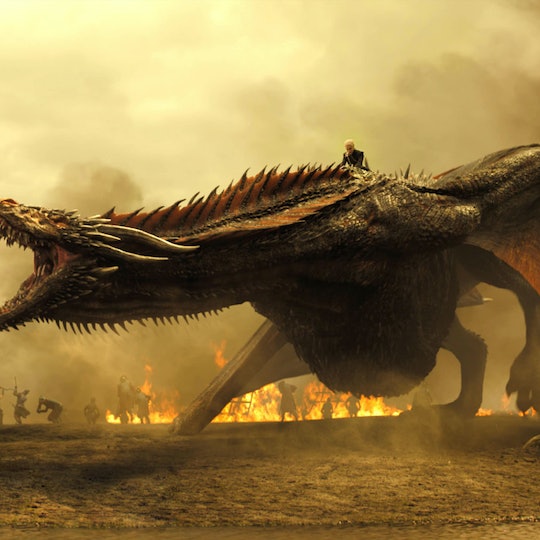 Game of Thrones aired its shortest episode ever, but it may also be the series' greatest one yet. Though it was a shorter episode, a lot still happened, including an epic battle between the Lannisters and Daenerys' dragon, Drogon, and the Dorthraki army. While Daenerys definitely won the battle, Drogon did end up getting hurt. So will Drogon die on Game of Thrones? Thankfully, the wound doesn't seem to be fatal.

After all her allies were killed or captured, Daenerys decided she was done with the "clever plans" and went straight into action. Though both Missandei and Tyrion advised against her fighting with one of her dragons, she ignored them both and rode Drogon into battle, along with the Dorthraki. To say the Lannister troops were unprepared would be an understatement.

With one "Dracarys," Drogon blew a hole through the Lannister forces that allowed the Dorthraki to come through and decimate their enemies with ease. When it was clear they were losing, Jaime sent Bronn to get the massive crossbow that Cersei hoped would help her defeat Daenerys' dragons. However, that didn't work out quite as planned.

Though Bronn was able to get a good shot at Drogon, near his wing, it wasn't detrimental enough to stop Drogon from shooting back, blowing the crossbow to pieces.

From the way Daenerys was struggling to get the arrow out of Drogon, it's clear the weapon went in deep. However, his ability to still fly and then almost kill Jaime and Bronn seems to indicate he'll be just fine. Thankfully, it'll take more than just an arrow to take out one of Daenerys' dragons, a fact Cersei will learn soon enough.

Now that Daenerys has decided to take things into her own hands, there's been a turn in the war. Not only did she kill a lot of the Lannisters' troops, but she also burned through the grain they were collecting for the upcoming long winter. However, this move may also prove to hurt Daenerys later, as the people won't be happy to learn they may end up starving once winter comes, thanks to Daenerys' dragon.

Even so, in the preview for the next episode it seems Daenerys isn't done yet. She's very set on everyone bending the knee to her, except unlike with Jon Snow, if those allied with the Lannisters don't agree to do so, they will die. Though Daenerys doesn't want to be judged by the sins of her father, she's certainly giving off Mad King vibes. Hopefully, with Tyrion's help, she'll be able to rein it in and still win this war.